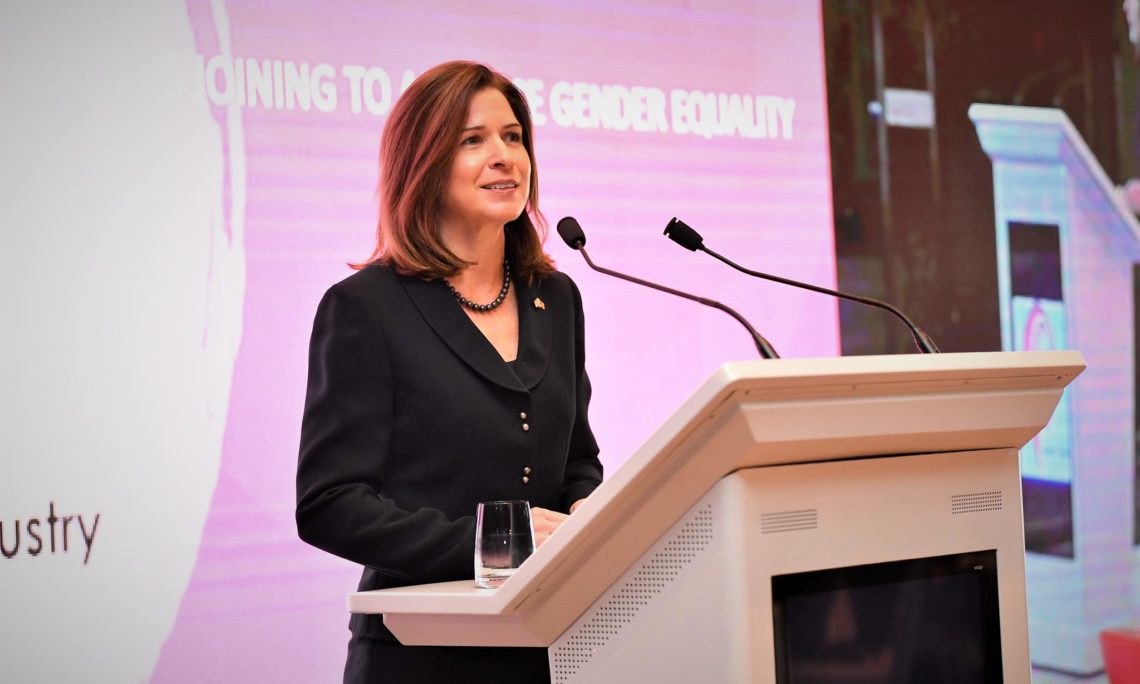 at Women in Industry Conference
October 9, 2019

Prime Minister Zoran Zaev, Professor Spasevska, Stefan, panelists, participants, media, ladies and gentlemen!  Thank you for inviting me to speak at this Women in Industry conference.  Congratulations to EVN and the Engineering Institute of Macedonia for again organizing and expanding this event to include gender balance in all industries and not just in energy.

The U.S. Embassy in Skopje is pleased to have been a supporter and active participant in this conference from the very beginning.  Today’s conversations and the actions you generate as a result align with our efforts to support a strong, stable and prosperous North Macedonia that is able to partner with the United States on our shared objectives.

This conference recognizes, as we do, the value that women bring to economic development when their unique knowledge and capabilities are included.  Earlier this year President Trump established the Women’s Global Development and Prosperity Initiative, the first whole-of-government effort to advance global women’s economic empowerment.

Expanding women’s economic participation has the potential to boost global economic output by an additional $12 trillion by 2025.  By investing in women, we are investing in a future in which countries can support themselves by unleashing the potential of their own people.

Here in North Macedonia, through USAID’s Engendering Utilities Program, we have actively invested in building the capacity of women leaders by sending young female professionals to Georgetown University’s McDonough School of Business.  There they gained valuable knowledge, and now they are leading their companies to a greater gender equality in executive positions.

I applaud EVN for its efforts and leadership in advancing gender diversity in the energy sector and beyond.  I am looking forward to seeing many other companies following this example, because it makes good business sense.

A McKinsey & Company study of 1,000 companies in 12 countries found that organizations in the top 25% when it comes to gender diversity among executive leadership teams were more likely to outperform on profitability and on value promotion.

Excellence springs from many sources, but too often women in male-dominated fields – scientists, engineers, innovators – have had to work more than a little bit harder to move from the shadows to the spotlight – from the margins to the center.

Today, Marie Sklodowska-Curie, known throughout the world simply as “Madame Curie”, is considered as one of history’s greatest scientists, male or female.  But her work was not adequately acknowledged or recognized at the time.  Only much later were institutions named after her – and not just after her husband.

Melvin Bissell invented a carpet-sweeping machine in 1876, but it was his wife Anna who took over as CEO after his death in 1889, who took the Bissell brand global through her strong leadership and marketing savvy.  She was the first woman CEO in America, and notably, also one of the first company heads to give workers pension plans and workers compensation.

Katharine Johnson, a NASA mathematician and the first woman in NASA’s Flight Research Division to receive an author credit on a report, was a “Hidden Figure”, until the best-selling book and blockbuster film of that name told the story of her invaluable contributions to flight research and data analytics along with those of her fellow female and African-American colleagues.

A leading role model for my generation was pioneering journalist Cokie Roberts.  At a time when the field of broadcast journalism had very few on-air roles for women, she had left her first job to get married and then spent eight months job-hunting and, in her words, wherever she went she was asked how many words she could type. It was her husband who delivered her resume to National Public Radio.  From there, however, Cokie took a front-row seat in history, and significantly helped shaped it.  When we mourned her passing last month, we also celebrated her legacy as a trailblazer. Who helped other women in her industry succeed and who told the stories of the often overlooked women heroes of American history.

There are other examples of women in science, technology and other believed to be “male” professions who were not given full credit for their work.  But there are also many stories of those who prevailed and proved vital for the success of projects, missions, businesses, and institutions.

Our main task today is to ensure that no talent, no ideas, no efforts are wasted simply because they come from a woman rather than a man.  The challenges facing our economies and societies require women’s ideas and women’s engagement.

We need to change attitudes, including among young women and girls who might think that professions like science, technology, energy, and engineering are not suited for them.  I hope that many female students, researchers, and innovators will be inspired to pursue careers in technical and power fields, and that their teachers, mentors, and parents – male and female –support them to follow their dreams.  I hope that companies will continue to support women as they advance to the top.  And I hope your discussions today lead to concrete ways we can help make that happen.

As one of America’s most inspiring women leaders, Oprah Winfrey said, “When women put their heads together, powerful things can happen.”