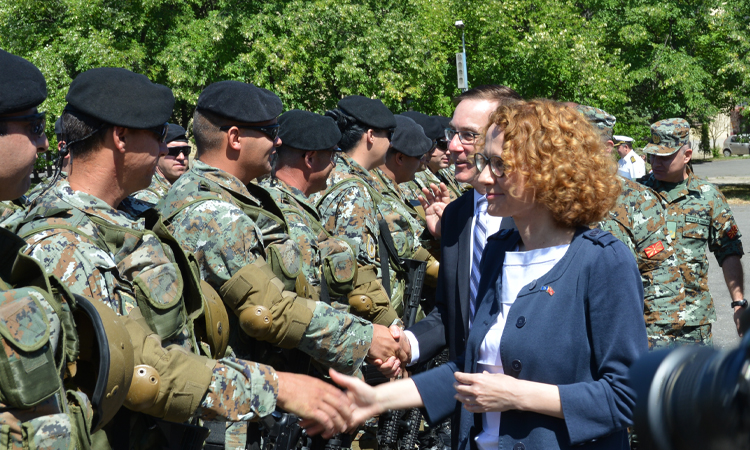 Thank you, Minister Shekerinska, Deputy Chief of Defense Racaj.  I am pleased to be here today to honor the long-term defense partnership between the United States and the Republic of Macedonia.

Today we send off 54 soldiers from the Army of the Republic of Macedonia’s Military Police and Special Forces to participate in Saber Guardian, a U.S. Army-sponsored exercise involving more than 25,000 soldiers from 22 NATO allies and partners. Another 16 engineers and medical personnel will join them later.

We often talk about the value of our military partnerships, about the importance of NATO.  The Saber Guardian exercise is partnership in action.  It is what builds our collective security.

Through exercises such as Saber Guardian, the United States reinforces ties with NATO allies and partners and reaffirms our enduring commitment to the collective defense and prosperity of Europe.  Joint exercises improve the ability of countries to collaborate, communicate, and integrate across military platforms; more importantly, they build personal ties among soldiers and strengthen our commitment to each other.

In 2016-2017 alone, nearly 600 soldiers from Macedonia will participate in over 20 U.S.-sponsored, multinational exercises across Europe and here in Macedonia.

This year, we are particularly pleased that following Saber Guardian, the United States and Macedonia will hold a joint training exercise, called Dragoon Guardian, in Macedonia.  Nearly 300 soldiers and 100 vehicles from the U.S. Army Europe’s 2nd Cavalry Regimental Engineer Squadron – along with eight Engineers from the Army of Macedonia – will travel from Romania to Macedonia for a two-week joint training event for U.S. and Macedonian soldiers.

We thank the Ministry of Defense and the Army of the Republic of Macedonia in advance for hosting the U.S. forces at Krivolak and helping to organize this training event, planning for which has been in the works for over a year.

I also want to thank the Government, the Ministry and the Army for their continued commitment to international missions, particularly in Afghanistan.  Our soldiers have served side by side there for 15 years.  Currently, 39 Macedonian soldiers are deployed to the NATO Resolute Support Mission, where they support a training mission for the Afghan National Security Forces.

There and elsewhere, the Army of the Republic of Macedonia has a great reputation, and we are proud of the close cooperation between our militaries, including your strong partnership with the Vermont National Guard.  We will continue to identify opportunities for joint training here, in Europe, and in the United States as we strengthen our cooperation and as we support Macedonia’s path towards NATO membership.

To those of you about to depart for Saber Guardian, I wish you well during this exciting, dynamic, and challenging exercise and look I forward to welcoming you and our U.S. soldiers back at the end of the month for Dragoon Guardian.