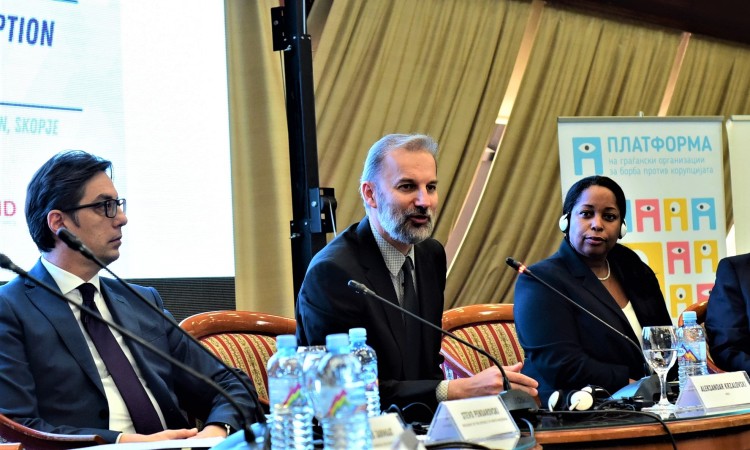 Policy Forum on “Delivering on the Promise of EU Enlargement:
30 Years of Governance and Anticorruption Reforms in Central and Eastern Europe”
December 13, 2019

President Pendarovski, members of the government and the judiciary, representatives of civil society and the media, distinguished guests and colleagues,

Good morning and thank you so much for inviting me to today’s event commemorating International Anti-Corruption Day, which we marked this past Monday.

Before I begin my remarks, I would like to thank the Anti-Corruption Platform and its members for organizing this year’s policy forum and to SELDI for making this into an event not only relevant to North Macedonia, but to the entire Western Balkan region.

The U.S. Embassy in Skopje is pleased to have been a supporter of and an active participant in this annual event since its inception five years ago.  Today’s conversations and the actions you generate align with our efforts to support a strong, stable, and prosperous North Macedonia that partners with the United States on our shared objectives.

We know that inclusive decision-making, openness to scrutiny, and strengthening of rule of law are all necessities if we are to make inroads in the fight against corruption.  The progress that has been made here to increase transparency and accountability are the result of the joint efforts of government, civil society and the private sector, all of which have made this fight a priority.  Your continued, collective commitment to meaningful reforms is an absolute prerequisite for success.

I think it is worth taking a moment to note several areas where we have seen—and need to continue to see—progress:

Despite this improved climate, however, corruption is still an enormous problem. Addressing and curbing it are in the best interest of all.  According to a 2018 UN report, the annual costs of corruption worldwide amount to a staggering 3.3 trillion euros. Nearly one trillion euros alone is paid in bribes annually, while another 2.3 trillion is stolen. This is equivalent to more than five percent of annual global GDP.

While we hear about some of the big corruption scandals, it is important to note that the acceptance of petty corruption in everyday life—the bribe to get out of a minor driving violation, to get your child into a good school, to get a business license or a zoning permit, or for a family member to get a job—infuses corruption into the very fabric of society.

We know that corruption fuels instability.  It discourages good governance and empowers organized crime and other malevolent elements that endanger a country’s security.

Corruption destroys faith in institutions.  There’s nothing more demoralizing, more destructive, more disempowering to any citizen than the belief that the system is rigged against them and that people in positions of power are not subject to the same rules.

That means everyone has a role to play, be they a senior member of government, an elected official, a civil servant, a police officer, a business owner or the average citizen.  No one is immune from corruption once it takes hold, and no one is spared the long-term damage it causes.

Governments alone cannot win this fight.  This must be a partnership, and all sides need to be engaged.

To the civil society organizations in the room, thank you for the vital role you play in detecting and deterring corrupt behavior.  Civil society groups organize communities to take action, advocate for accountable and transparent institutions, support journalists who investigate and expose corruption, and work with government institutions to propose policies that deter abuse.

To the business owners and private sector representatives here today, you too have an important role to play.  Through business chambers and other advocacy groups, you can speak out against bad policies and corrupt acts that hurt your bottom line.  You can partner with educational institutions so that your future workforce is schooled in ethics.  And of course, when you see corruption, you can speak up rather than turn a blind eye or accept it simply as the “cost of doing business.”

To the judicial and prosecutorial leaders here today, we know that building more independent, stronger, and resilient judicial institutions is the “long game”.  Significant strides have been made in the fight against corruption here, but more must be done to show a track record of investigating, prosecuting, and trying high level corruption cases.

On legislation, I cannot stress enough how important it is that a new law on the Public Prosecutor’s Office be adopted, to demonstrate the national commitment to fighting corruption and building a strong prosecutorial institution.  And I say “national” commitment because this is above politics; this is important for the country and its future. That means that responsibility falls not just on the governing coalition, but on all parties elected.  The opposition has the responsibility to be constructive, to engage, and to push for positive change.  Without the participation of all the parties and political actors, these positive reforms will not advance or be effective.

Together, the government, the opposition, civil society organizations, the private sector, and the public—all the elements in your society—are needed to tackle this challenge.

Our expectation is that progress in fighting and preventing corruption at all levels will continue to be a top priority.  The cost of corruption is too high, particularly when the rewards gained in terms of efficiency and good governance are so great.

Working together, I am confident that all elements of society here can learn the lessons of the past, collaborate in the present, and create a promising, prosperous future.  The opportunity is there. I urge you to seize it.