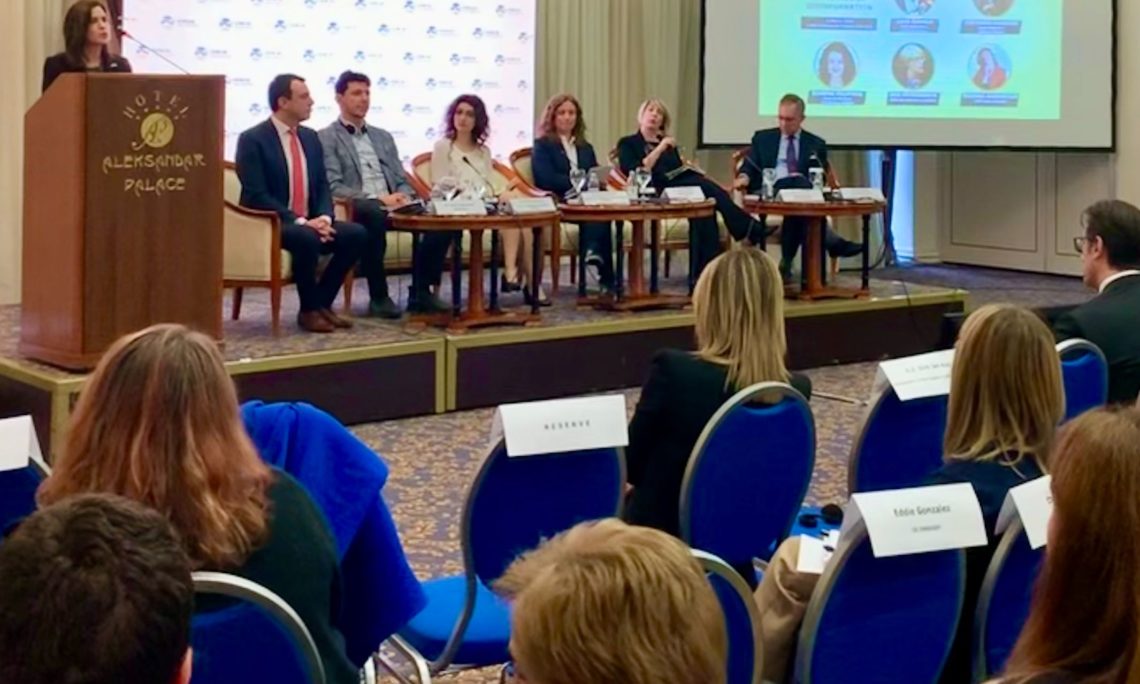 Ambassador Byrnes joined President Pendarovski at the Citizens Association MOST’s panel discussion “The Harmful Influence of Disinformation“ to speak about aspects of disinformation and its impacts on society.

President Pendarovski, journalists, representatives of civil society and the media, distinguished guests and colleagues, thank you for inviting me to participate in the opening of this conference today.  This event could not be more timely, given the nexus of events—North Macedonia’s imminent NATO membership, the upcoming elections, concerns about the coronavirus—which we know are all the types of issues that proponents of disinformation seek to misrepresent, distort, or exploit for various malign motivations.

We have made challenging disinformation a priority in our efforts to support North Macedonia as it realizes its Euro-Atlantic aspirations.  Through a combination of programs, messaging, and interactions throughout the country, we have sought to raise a red flag about the way that disinformation, if unchecked, erodes public confidence not just in the government or in institutions, but also in the very fabric of society.

Truth is not relative.  Facts are not negotiable.  We can debate opinions, and there must always be as open and transparent a public discourse as possible.  There cannot be room, however, for completely fabricated conspiracy theories or blatant lies.  Public safety could be jeopardized, and lives put at risk.  Those who promote or who share unfounded, unverified, or outright malicious material on social media are complicit.  To social media users, the message should always be “think before you click” and “check before you share.”

Another kind of disinformation is the more common type, that we have all seen at one time or another:  the type that is based on partial truths.  The story will start with a factually correct sentence, usually, but then shift into a stretch or exaggeration, and then conclude maybe with a so-called expert who may or may not have said what he or she is quoted as having said, and who may or may not even be real.  We’ve seen cases where the quotes are correct, if you google them, but they refer to a completely different topic.

This type of information is particularly insidious because it is designed to lure people in, and many people don’t read further than the first line before they share it.

Unfortunately, in this region has gotten some attention in recent years for being a producer of some of these false narratives, which apparently have become a lucrative industry in certain parts of the country.  To those purveyors of this disinformation, I want to stress that what you are doing comes at an enormous societal cost.  Don’t let profit cloud judgment.  There’s no easy money to be made here—the cost at the other end is something that whole communities, even whole countries, end up paying.

I also want to say a word about the underlying infrastructure behind disinformation, since how disinformation is spread is a critical aspect of this challenge.  Networks of fake social media pages are the biggest culprit here.  Disinformation-promoting web portals—often funded from outside the country—also play an important role in making disinformation, semi-truths, or biased information look reliable and credible.  It is not easy to spot “inauthentic behavior,” as it is known, unless you know what to look for and have the capacity to analyze the origins of stories and narratives.

We continue to work with partners here in country to build that capacity, to help ensure that this type of malign behavior can be identified publicly.  The key to fighting disinformation is to identify it quickly, and I believe we are making progress in developing the capabilities to do just that here.

Finally, I would like to comment on the funding issue.  Much of the underlying social media infrastructure promoting disinformation is free or at least inexpensive, and therefore easy to set up anonymously.  The web portals, however, generally require money to operate.  When it comes to opaque funding coming into the country through deceptive means—through possibly fake advertising, for instance, as has been reported on recently—we should all be concerned.  Not only are consumers being deceived, but when the sources of funding are not transparent, there is always a concern about money laundering or other illicit activities.

Government entities empowered to enforce regulations and issue licenses are the front-line in this effort. It is imperative that they do their job thoroughly and ensure that any entity utilizing public airwaves is complying fully with the rules.

All of the regulations, however, don’t suffice if the public isn’t aware and isn’t vigilant about this problem.  We are literally drowning in sources of legitimate and sometimes fake news, to an extent unimaginable even 25 years ago.  This means the public needs to develop strong filters and defenses, to know which sources are fact and which are opinion, to determine which media to trust and which ones they might want to look at more skeptically.

This is where all of your efforts can make the most difference.

Because in the hands of an educated and aware public, facts and information can be an advantage.  If properly utilized, they can be a force of good, of accountability, of transparency.

In the end, combatting disinformation is a group effort.  Everyone—media, civil society, the responsible government institutions, and the public—has a role to play in ensuring these mechanisms work.

So thank you all for coming here today to tackle that challenge together.