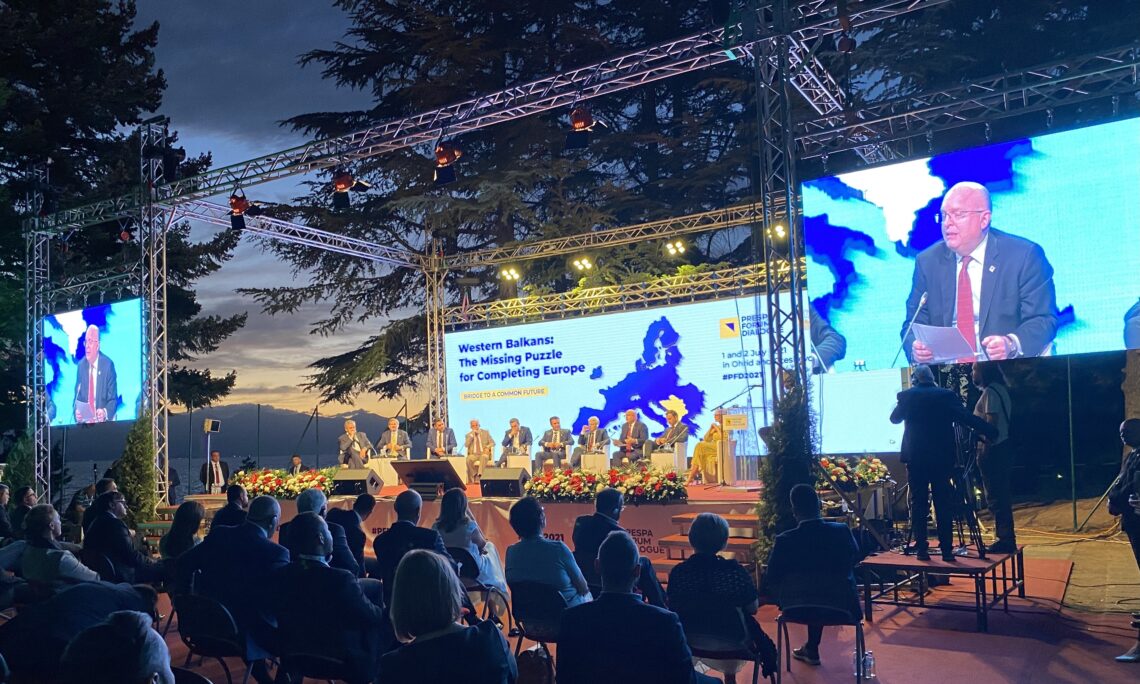 A/AS Reeker delivered remarks at the official opening event of the "Road to Prespa" Conference, July 1, 2021

It’s such a pleasure to be here, back in beautiful Ohrid, and among a group of such distinction.  What a setting, as this year we observe the 20th anniversary of the Ohrid Framework Agreement, and recognize the Agreement as important to North Macedonia’s progress and where it is today.

I believe we are all keenly aware that some of the most important things—some of the things that leave the most enduring and positive impacts, are often the hardest.  The Prespa Agreement took concerted diplomatic courage from leaders of North Macedonia and Greece.  When we reflect on its legacy—even as that legacy continues to evolve, what stands out to me is that Prespa set a standard for the rest of the region in how to peacefully resolve outstanding conflicts through dialogue, and confirmed for the world that leaders of the Western Balkans were up to the challenge.  That future-minded thinking opened the door to NATO, and the United States was proud to welcome North Macedonia into the Alliance early last year.

The Prespa Agreement has already brought concrete benefits to both North Macedonia and Greece – ushering North Macedonia into history’s most successful Alliance, reaffirming Greece’s commitment to the Western Balkans, and furthering our shared goal of moving North Macedonia closer to EU membership.  Building on that achievement and moving towards further European integration has not been easy, and the work here is definitely not yet complete, but it is important to recognize the role this country is playing in furthering progress not just in the region, but more broadly in Europe.

It is timely that we are gathered just a few weeks after President Biden signed Executive Order 14033.  Importantly, this update to the previous sanctions regime specifically recognizes the malign role corruption continues to play in undermining the stability of the region. The order also incorporates important regional developments such as the Prespa Agreement and the International Residual Mechanism for Criminal Tribunals, and clearly defines the Western Balkans region to include Albania.

The United States remains intently focused on the Western Balkans, as a lynchpin in our vision of a Europe whole, free and at peace, and the new Western Balkans sanctions E.O. helps reinforce that goal by promoting accountability, encouraging progress toward effective and democratic governance and full integration into transatlantic institutions, and to dissuading actors who seek to undermine this progress.

The Prespa Agreement also improved collaboration on energy, defense, and trade between Greece and North Macedonia.  We’re particularly pleased to see steady progress on the natural gas interconnector, which would allow North Macedonia to import natural gas from global suppliers, including from the U.S.  This interconnector will not only bring greater flexibility and energy security to the entire region, it will quicken the region’s transition from lignite and bring it closer to meeting carbon reduction goals.

North Macedonia has also demonstrated leadership in the defense arena.  We recognize the NATO Alliance faces a range of 21st century threats, including from Russia, as outlined in the NATO 2030 Agenda.  As NATO’s newest member, North Macedonia welcomed NATO Allies and partners to the Krivolak Training Area for an impressive Decisive Strike 21 exercise in May, despite the challenges of executing such an event during a pandemic.  And North Macedonia’s defense cooperation with Greece, which assists in air policing missions over North Macedonia, is a powerful symbol of how the Prespa Agreement has bolstered the entire region’s stability.

Agreements like Prespa, membership in NATO, and eventual membership in the EU—lend the stability that foreign investors look for when considering where to invest.  But beyond foreign investors, as Prime Minister Zaev likes to say, Prespa has benefited everyday citizens too.  More Greek companies are investing in North Macedonia, participating in upcoming renewable energy auctions, putting forth proposals to link the countries’ energy markets, and investing in new manufacturing plants – all of which benefit North Macedonia, in terms of job creation and knock-on benefits to consumers.  I understand Prime Minister Zaev recently told a delegation from the American-Hellenic Chamber of Commerce they could “count on us [North Macedonia] like home.”  Statements like this demonstrate the power of Prespa.

Much like Prespa, the 2017 Friendship Treaty with Bulgaria signaled North Macedonia and Bulgaria were capable of negotiating and resolving issues together, and we are heartened by the continued work that is being done to implement that treaty.  We recognize a number of tangible steps have been taken to build goodwill, and both sides recognize the opportunity to do much more – to connect business chambers across a number of sectors, to advance Corridor 8 infrastructure projects to tie both countries’ citizens together, to move forward on plans for a gas interconnector, and to deepen cooperation among universities and youth.  We hope that Bulgaria and North Macedonia resolve their bilateral issues so that our NATO Allies North Macedonia and Albania can continue on their EU paths without delay.

The international community recognizes the significant progress North Macedonia has made, and the courage it has taken to achieve solutions to the challenges the country has faced.  Much remains to be done, and the opening of EU accession talks is the beginning of a process that will require continued determination and commitment.  We are confident North Macedonia can and will do all that it takes–sustaining the pace of reforms, strengthening the rule of law, rooting out corruption, and increasing transparency—to guarantee a peaceful and prosperous future for its people and to anchor the stability of the region.  Please know that the United States will continue to stand by you, as a partner and an ally, in these efforts.