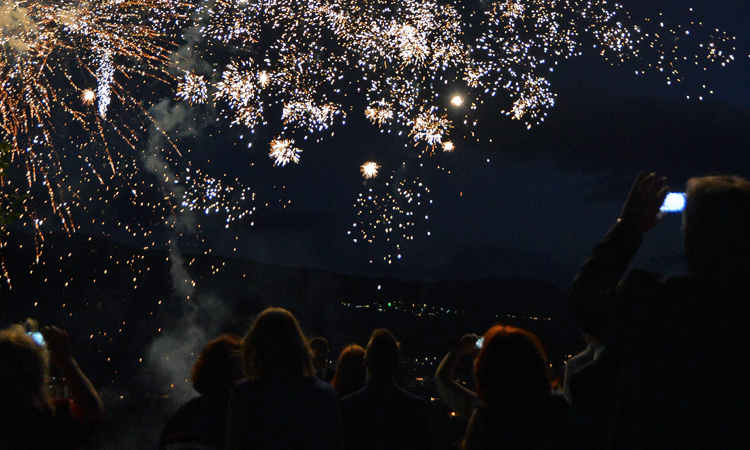 It is a pleasure and an honor for me and Capie to welcome everyone to the U.S. Embassy tonight to celebrate the 241st anniversary of the independence of the United States of America.

I want to extend my special gratitude to all the businesses that generously supported this wonderful event – you can see the names of all our sponsors on the display behind the stage. We truly appreciate your continued support through the years. Please, join me for a round of applause to thank them for their generosity.

Another special thanks to Leana Taki and Kanita Suma for their beautiful performances of our national anthems, and to Lea and The Hounds for entertaining us tonight.

Lastly, I want to recognize my colleagues at the Embassy who have been working on this event since the beginning of the year. They do know how to throw a party!

As you walked around tonight, you may have wondered about all the bridges on the grounds and in photos. People have been building bridges since ancient times – to cross water, valleys, over rough terrains. They play a prominent role in the history of Macedonia and the Balkan region, and in my country as well.

As Ivo Andric observed,
“Of everything that man erects and builds…nothing in my eyes is better and more valuable than bridges. Belonging to everyone and being equal to everyone, useful, always built with sense, on the spot where human needs are crossing, they are more durable than other buildings and they do not serve for anything secret or bad.”

A bridge is a powerful metaphor – of connection and progress. “Building bridges” means bringing people together, overcoming differences, and moving forward. And I see the U.S. Embassy as one such bridge – as we work with Macedonia and its citizens based on shared values to move forward toward common goals.

This theme of bridges struck me last fall on a visit to my hometown of Cincinnati, Ohio. Like Skopje, a bridge lies at its heart and shapes its identity. That bridge, the Roebling Bridge, spans the Ohio River, connecting the states of Ohio and Kentucky.

When it opened 150 years ago, it was the longest bridge in the world, a title it held until Mr. Roebling completed the Brooklyn Bridge in New York 20 years later.

The Roebling bridge was not just a feat of engineering; it helped reunite a country torn by war. You see, the outbreak of the Civil War interrupted its construction. The Ohio River marked the border between North and South, between Ohio and Kentucky, between free state and slave state.

When the war ended in 1865, construction restarted in earnest. And its completion two years later literally reunited a city, two states, and a nation.

Today, it remains a symbol of economic progress and human connection. Standing near this bridge three weeks ago, President Trump challenged Americans to “recapture our legacy as a nation of builders and create new lanes of travel, commerce and discovery.”

The theme also seems appropriate to this moment in Macedonia. It is a time of building unity across parties and communities to realize a common goal – that of a secure, prosperous and democratic Macedonia moving toward NATO and EU membership.

It is about reaching out to your neighbors, overcoming differences, and strengthening regional cooperation – sometimes literally through the construction of bridges and other infrastructure.

Building a bridge, much like any other structure built by humans, is not just a one-time job. We cannot just construct a bridge, put in years of planning, labor, and resources, and once done, leave it to itself, hoping for the best.

A bridge needs tending; it needs continual care and maintenance — the Roebling Bridge, for example, has been substantially overhauled and repaired four times just in my lifetime.

The symbolic bridges we build among our nations through cooperation and exchange also require constant care and maintenance. By all of us. That is what brings us together tonight.

We must keep working together to strengthen the ties between our countries – whether it is through expanding business and investment, through joint army training like the Saber Guardian exercise next month, or through exchanges between our students and citizens.

On July 4, 1776 the United States severed its bonds with the British crown, declaring independence and embarking on 241 years of representative democracy. Today, the United Kingdom is one of our closest allies.

We have spent much of the past 200 years rebuilding our ties, our bridges, to the UK and other European allies. Though an ocean divides us, the bridges of shared values and goals for global peace and prosperity tie us together.

And through partnerships here, we work together to build a stronger future for Macedonia, one in which its citizens enjoy all the benefits of democracy and membership in that Euro-Atlantic community.

In 1777, while our war for independence still raged, the city of Philadelphia marked the first Independence Day by adjourning Congress and celebrating the day with bonfires and fireworks. We have preserved this festive tradition, and I delighted to share it with you tonight. The fireworks will begin in a few minutes as night falls.

I also want to encourage you to walk around and take a closer look at our displays, which feature some of the most inspiring and beautiful bridges from all around the United States.

And use the opportunity to cross a bridge – to make a new connection or renew an old one.

Thank you for joining us this evening and enjoy the fireworks and music.