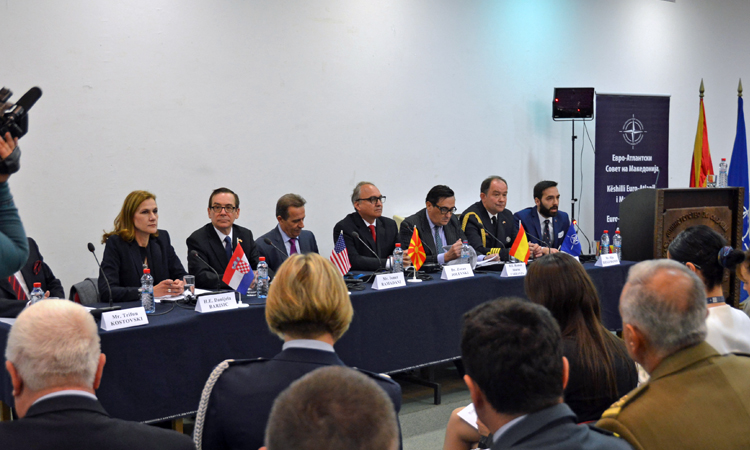 It is a pleasure to be here again at the Euro-Atlantic Council of Macedonia to celebrate NATO Day.  This year’s event seems particularly timely.  This past Friday, Secretary of State Tillerson joined other NATO Foreign Ministers in Brussels to discuss critical issues facing the Alliance, particularly the issue of defense spending and the fight against terrorism.  During the visit, he clearly reaffirmed that “the United States’ commitment to NATO is strong, and our bond remains essential for facing national and international security challenges in an increasingly unstable world.”

This week also marks another important anniversary, and that is the centennial of the United States’ entrance in the First World War, which was the first time when the United States became really a participant in European security.   When President Woodrow Wilson addressed Congress about this decision, on April 6, 1917, he said, “We shall fight for the things which we have always carried nearest to our hearts – for democracy, for the right of those who submit to authority to have a voice in their own governments, for the rights and liberties of small nations, for a universal dominion of right by such a concert of free peoples as shall bring peace and safety to all nations and to make the world at last free.”  Those basic principles have underlined our approach to Euro-Atlantic security ever since.

I would say that that second anniversary has a personal side for me.  In April 1917, shortly after Woodrow Wilson spoke, my grandfather enlisted, and fought in the Ardennes, on the Western Front.  In 1944, my father-in-law landed on the beaches of Normandy.  In 1976, I came to France – but not as a soldier like they; I came as an exchange student. And indeed, I think it is because of the existence of the NATO alliance and our transatlantic security that it has provided that I was afforded the opportunity to do just that.

NATO members form a unique community of values, committed to the principles of democracy, individual liberty, and the rule of law.  It embodies the conviction that North America and Europe and their security are inextricably linked together.  Political leaders on both sides of the Atlantic – and across the political spectrum – have always agreed on our core mission:  we defend each other, to preserve the peace and protect our freedom and values.

In the years since NATO’s formation in 1949, it has become clear that the security that comes from military cooperation and collective defense also fosters a broader kind of success – it encourages democratization and spurs economic and political progress as well.  No part of the world has been more prosperous, stable, and peaceful over the last 68 years than the countries that belong to NATO.

Today, we are facing some of the greatest security challenges in a generation, and transatlantic cooperation is more important now than ever.  We are adapting to this new security environment, by strengthening our deterrence and defense posture and projecting stability beyond our borders.  At the Warsaw Summit, we committed to enhancing NATO’s forward presence in the eastern part of our Alliance.  We are stepping up our efforts to fight against terrorism, and working with partners in the Middle East and North Africa.  And we continue to adapt to new threats, including by bolstering our cyber defense.

NATO’s door remains open to European nations able to undertake the commitments and obligations of the membership, and to contribute to security in the Euro-Atlantic area. Last week, the United States Senate voted, almost unanimously, to ratify Montenegro’s admission into NATO.  When that process is complete, Montenegro will be the 29th member of the Alliance.  As NATO Secretary General said: “Montenegro’s admission is a clear example of NATO’s commitment to the Open Door,” and this policy, along with EU enlargement, has helped spread stability and prosperity.

Here in Macedonia, we continue to support Macedonia’s goal of joining NATO.  To achieve that goal, it is important to remember that NATO is more than the sum of our combined military capabilities.  NATO is a family joined by shared values and a desire to protect our values as much as our territory and our people.  Aspirants to NATO need to meet its high standards for membership in this regard.

Since the Warsaw Summit, you have seen NATO allies and the Secretary General alike express concern about the situation here.  I certainly felt this last week and heard it when my British colleague and I discussed Macedonia with the Committee of Deputy Permanent Representatives in Brussels.  As Secretary General Stoltenberg has emphasized to your leaders, it is vital that they live up to their commitments in the Przino agreement in order to solve the political crisis.  December’s elections were deemed credible; Parliament is in session; and now it is important to respect democratic norms and the constitution, and to move swiftly towards forming a government that can act on the country’s reform agenda.

President Trump has also stated his strong support for NATO, but he has also emphasized the importance of allies fully meeting their commitments to the Alliance.  NATO will remain strong only if all nations show their respect for NATO’s benefits and carry a full and equal burden of our defense.  Here in Macedonia, investments in the modernization of your armed forces and participation in NATO and related operations, training, and exercises show this commitment.

As the Minister noted, Macedonia has been a steadfast ally in international peace support operations for more than a decade.  Right now, 39 Macedonian soldiers are deployed to the NATO Resolute Support Mission in Afghanistan, and last week, the Special Operations Battalion returned home from Germany after participating in the three-week exercise Allied Spirit with 34 of their soldiers.  This July, over 70 Macedonian soldiers will participate in Exercise Saber Guardian, along with numerous allies and partners.  These are just two of the 10 exercises in which Macedonian forces will continue to prepare and improve their readiness, and demonstrate their considerable capabilities over the next several months.

The Government of Macedonia and the Ministry of Defense are also taking important steps toward modernizing your military and making it more -interoperable.  This includes a 10-year investment plan to achieve your objectives, as the Minister has already described.  The United States remains committed to helping you along the way through our bilateral assistance. In this regard, I would also commend Macedonia’s participation and leadership in regional initiatives to bolster security and work with both NATO partners and allies.

To conclude, on this 68th anniversary of NATO’s founding, we remember that NATO has safeguarded the freedom and security of its members, promoted democratic values, and helped ensure regional stability for the benefit of both member nations and non-members alike.  Over the last year, our world has become more dangerous and more unpredictable.  But NATO is adapting to keep our nations safe.  In 2017 and in the years ahead, NATO will remain an anchor of stability: staying strong, open for dialogue, and working with our partners around the world.

The United States looks forward to its continuing partnership with Macedonia and to one day welcoming you as a full member of the Alliance.