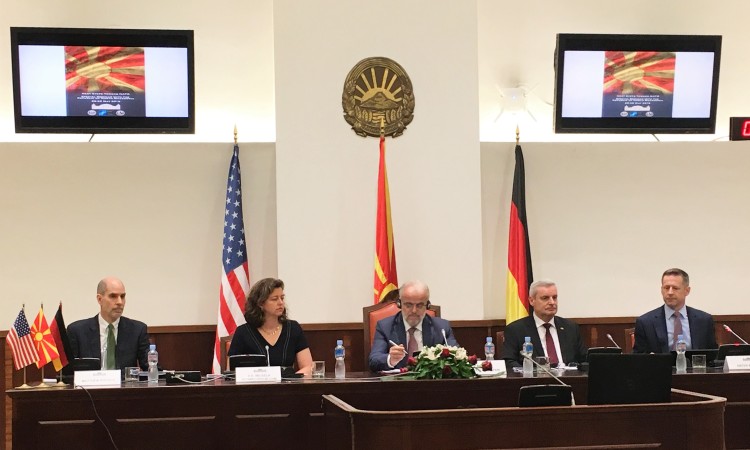 Remarks by Chargé d ’Affaires Micaela Schweitzer-Bluhm at the

“Next Steps Towards NATO”
Seminar in the Parliament
May 29, 2019

It really is my pleasure to be here today to launch this seminar and to kick-off the discussions you will have over the next couple of days.

I want to thank Parliament and Speaker Xhaferi, and the Marshall Center for organizing this event and for bringing together this really excellent cross-section of people who share interests and responsibilities for North Macedonia’s NATO membership.

This is a truly exciting time in North Macedonia. It’s a turning point for the country.  Already 13 countries’ parliaments have ratified your NATO accession protocols and U.S. ratification is well underway.  The United States looks forward to welcoming North Macedonia as the 30th member of NATO.

When you join NATO, we will not just be partners; we will be Allies.  We will enjoy a deeper relationship and a deeper commitment to each other.

NATO embodies the unique bond that unites Europe and North America.  Our security is indivisible. We stand together to preserve peace, and we pledge to defend one another. An attack against any Ally, from any direction, will be met by the Alliance as a whole.

In just a few days, North Macedonia will host the Decisive Strike exercise, one of the largest joint military exercises since your country’s independence.  It is a powerful example of how your forces are preparing themselves to be NATO-ready forces, ready to work with NATO allied militaries to address jointly future threats.

It also clearly demonstrates the contribution North Macedonia can make to NATO and to the military preparedness of your soon-to-be allies, including the United States.

A lot of work has gone into preparing North Macedonia for NATO accession.  Your military is making excellent strides in its transformation and modernization into a capable military and a strong security partner.

However, hard work remains.  The Ministry of Defense and the Army need your support and leadership as parliamentarians and government leaders.

Only with your help can North Macedonia ensure that its armed forces join NATO as an interoperable, effective, and efficient military force.

The discussions you will have over the next two days are intended to better prepare you for your role overseeing and supporting your NATO obligations and commitments.  You have a unique role in making North Macedonia’s NATO membership real, in overseeing your military, and in ensuring the army has what it needs to be effective and to secure North Macedonia.

I hope you will find these discussions useful and productive.  I look forward to hearing your feedback particularly on how we can continue to work together to ensure North Macedonia joins NATO as an effective, accountable, and contributing member of the Alliance.