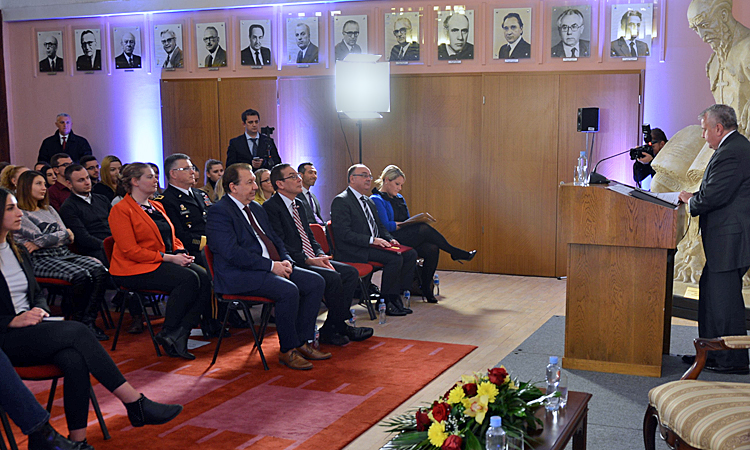 DEPUTY SECRETARY SULLIVAN: Thank you, Dr. Jankulovski, for that kind introduction and I apologize for my premature entrance onto the stage. Good afternoon everyone. I am delighted to be here in Skopje today, and I am especially honored to be at the Saints Cyril and Methodius University’s Faculty of Law, which I understand is Macedonia’s largest university.

We stand here today at a very important moment in Macedonia’s history, as its people have chosen to confirm the country’s bonds with the West.

As Prime Minister Zaev and I discussed this morning, the Prespa Agreement with Greece was a tough compromise that took time, patience, and courageous leadership. The two countries reached a compromise to advance the strategic goals of greater stability and prosperity in the region – goals that I know your friends in America and Europe share.

As with any compromise, both sides feel that something is lost, and I do understand that some feel this very deeply. We also know that it is not yet a done deal – as members of Parliament told me today, there are still several steps before the agreement comes into force. Nonetheless, the United States looks forward to soon welcoming Macedonia as our 30th Ally in NATO as the Republic of North Macedonia.

The decision to enter NATO is a sovereign choice of the people of Macedonia. We enthusiastically support that choice.

The future of this country is bright. Macedonia stands on the brink of realizing a dream over two decades in the making. How this unfolds is up to you and your fellow countrymen and women, but the United States stands ready to help as you prepare to change the course of your nation’s history.

The world, as you all know, has changed dramatically in the last 20 years. Great power conflict has returned to center stage – some would say that it never really left – and Macedonia finds itself targeted by Russian efforts to undermine its independence and thwart the democratic choice of the citizens of Macedonia and citizens of other nations in the region who believe their future lies with the West.

In addition, we continue to face threats from terrorism, as well as bad actors who want to disrupt and de-stabilize democratic systems. To defeat them, we need strong nations, with firm democratic foundations, free media, and vibrant, open markets.

Realizing this vision requires that citizens take pride in building strong institutions; and that they demand accountability and transparency from those institutions. It means that citizens refuse to look the other way when they see corruption and abuse. It means no longer shrugging one’s shoulders and accepting things as the “way they are” in the face of nepotism or cronyism.

Today, Macedonia is an example of cooperation and political courage. Macedonia can be a leader in the Balkans and act as a regional mediator in other conflicts. We already see Macedonia shouldering its share of the burden of our collective security.

Macedonia is a strong partner in the Coalition to Defeat ISIS. Our soldiers courageously fought alongside each other in Iraq, and continue to do so in Afghanistan. In the last year, over 600 U.S. and NATO troops have trained in Macedonia at the Krivolak Training Area. And, next year, over 1,000 U.S. troops will participate in exercises with Macedonian troops here at Krivolak. Indeed, this week, we celebrate the 25th anniversary of the State Partnership Program between the Vermont National Guard and the Army of the Republic of Macedonia. We thank Macedonia’s soldiers for their contributions and commitment to meeting our common challenges.

Now, let me return again to Russia for a moment, as countering its malign influence has been a major focus of my trip to the region. Russia’s aggressive actions seek to undermine Western values of freedom and democracy. Russia’s goal is to impede the national sovereignty of countries on its Western borders. Russia is no friend of small nations; its vision is neo-imperialistic. Russia has suppressed opposition voices at home and sought to weaken democratic institutions across Europe. As we saw in the Kerch Strait, Russia continues to violate the sovereignty and integrity of Ukraine and Georgia. Moscow is attempting to deny Macedonia’s right to determine its own future, in this case by opposing the choice the people of Macedonia have made to join NATO.

In stark contrast, the United States stands shoulder-to-shoulder with Macedonia, in support of its citizens’ sovereign determination to pursue a path that leads to the West. Happily, our goals align with yours. We want what you want, and we look forward to watching you – the next generation of leaders – build upon the hard work of your predecessors in the pursuit of security, peace, and prosperity for your country.

Now, as I close, I would like to hear directly from you about the opportunity you have in front of you, to realize a more prosperous future for Macedonia. You will make this country stronger – a place where smart, hardworking young people can build a bright future. And a stronger Macedonia makes for a stronger Western Balkans, a stronger Europe, and a stronger Western Alliance.

So I thank you for letting me come here and speak with you today. I want to keep these remarks short so we can have an exchange, a dialogue, and talk about questions that are of interest to you. So I will conclude these remarks and I look forward to having a conversation with you now. Thank you.