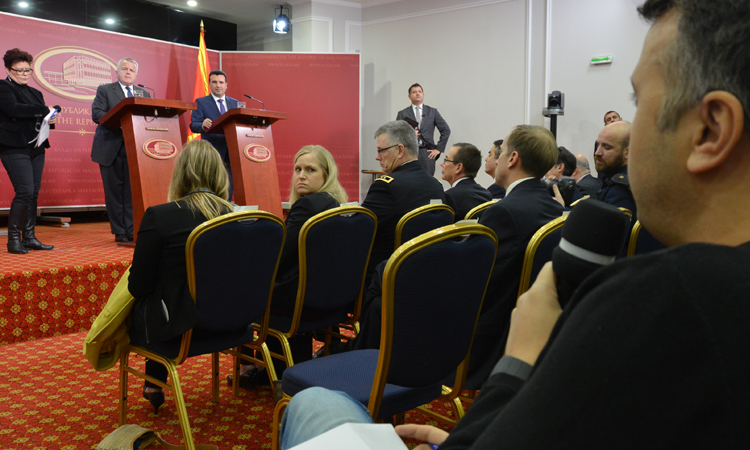 Deputy Secretary of State John J. Sullivan joint press conference with Prime Minister Zoran Zaev at the Government of the Republic of Macedonia.

DEPUTY SECRETARY SULLIVAN: Thank you for that kind introduction, Prime Minister. It is a great honor to be here with you today. I have had already a fruitful visit to Macedonia. I have had the honor of meeting several government officials. As I have discussed in my meetings with Prime Minister Zaev, with Foreign Minister Dimitrov, the United States strongly supports full implementation of the Prespa Agreement, which will allow Macedonia to take its rightful place in NATO and the EU as the Republic of North Macedonia, contributing to regional stability, security, and prosperity. We are committed to the security and stability of southeast Europe, and Macedonia is a key part of that stability. Indeed, we see Macedonia as a leader in the region in its commitment to peace, stability, and cooperation.

I applaud Prime Minister Zaev and Foreign Minister Dimitrov, and the courageous leadership of those Members of Parliament who, in October, took the next step to secure a brighter future for Macedonia and its citizens. Your votes have set your country on a path to a safer, more secure, and more prosperous future.

Now, as the implementation process continues in Parliament, we urge more members to set aside partisan interests and remain focused on your shared strategic goals. There is no alternative answer. Your hopes for a brighter future for your country are within your grasp. It is critical that Macedonia not lose sight of its reform priorities to strengthen the rule of law, enhance the independence of the judiciary, and to improve governance and the capacity of institutions to serve the people.

The United States shares your commitment to peace and security in the region and the world, and we look forward to an even closer partnership in the future.

Thank you again, Prime Minister, for your kind hospitality and for such a productive visit.

QUESTION: If the process succeeds in Macedonia, is it also likely to succeed in Greece, bearing in mind existing disagreements in the Greek Government over the Prespa Agreement and the announcements of [Greek Defense Minister] Kamenos that his party will leave the government? Can the tight majority adopt the Agreement, and what happens if it is not adopted?

DEPUTY SECRETARY SULLIVAN: Thank you for that question. Of course, it is an Agreement with two sides, an agreement reached by two courageous leaders. We are convinced in the United States that this Agreement is profoundly in the national interest of both Macedonia and Greece. Secretary Pompeo met with a Greek delegation last week as part of the Strategic Dialogue with Greece, and we’re in agreement with Greek colleagues on the importance of the Prespa Agreement, its importance for the future of Greece. We look forward to supporting Greece as it implements the Prespa Agreement, for the prosperity and the future of both Greece and Macedonia, and their relationship together. Again, I want to emphasize the courageous leadership of the two prime ministers, of Macedonia and Greece. The Agreement that they have reached for the benefit of their respective countries and the region is something that the United States is proud to support and the principal reason that I am here today. Thank you.

QUESTION: We are seeing increasingly hostile rhetoric in the region against Macedonia, especially as the Prespa Agreement is moving towards final ratification. Do you see Russian influence in this, especially as Moscow openly opposes the Agreement and is possibly putting all efforts for the Agreement to fail?

DEPUTY SECRETARY SULLIVAN: I am proud to stand here on behalf of the United States in support of what the Government of Macedonia and the people of Macedonia want – which is accession to NATO and the EU. They support this Government and its efforts to achieve that, including the Prespa Agreement. I am proud to support that; the United States is proud to support that. We support it; we are not instigating it. These are decisions that have been made under what I have previously described as the courageous leadership of this Prime Minister. The United States stands in support of that.

I don’t think it is any secret that the Russian government stands in opposition, in opposition to NATO membership for Macedonia and, I think it is fair to say, will undertake whatever activities they could to undermine, for its own interests, what the Macedonian people and the Macedonian government have decided are in this country’s best interests. The United States stands with Macedonia. I don’t think it’s any surprise to anyone in this room that Russia is opposed to the path that Macedonia has chosen, and [Russia] will implement means that will try to undermine that, any means available that they can. We have seen that in other parts of Europe, we have seen that in U.S. elections previously in 2016, for example. So, that’s not a surprise; but again, I want to emphasize it’s the United States that is standing with Macedonia, with its courageous government, with the people of Macedonia. We will assist others who are united in supporting this government in confronting and exposing Russian malign influence in Macedonia, elsewhere in this region or in Europe or wherever it seeks to undermine the legitimate democratic processes in governments that have made decisions in the interests of their people, as Macedonia has done here. We will stand with those governments; we will stand in opposition to that malign influence, do all we can to oppose it and expose it.