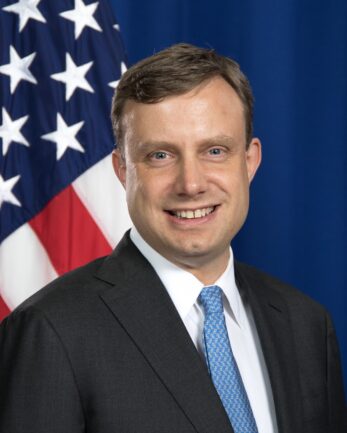 Eric Meyer, a career Foreign Service Officer, assumed the position of Deputy Chief of Mission at the U.S. Embassy in Skopje in August 2021.

Most recently, Eric served as U.S. Consul General and Principal Officer in Almaty, Kazakhstan, representing U.S. interests in southern Kazakhstan at the only U.S. Consulate in Central Asia.  From 2016-2017, Eric served as Special Assistant and Senior Advisor in the Bureau of South and Central Asian Affairs in Washington.  Prior to that, he was Consul General in Phnom Penh, Cambodia where he frequently served as Acting Deputy Chief of Mission.

Eric was previously Consul at the U.S. Embassy in Helsinki, Finland where he also served on the board of the Fulbright Commission. His first diplomatic overseas assignment was as Vice Consul in Buenos Aires, Argentina followed by an assignment as a Cultural Affairs Officer in Cairo, Egypt.  In Washington, Eric also served as an advisor in the Bureau of Oceans and International Environment and Scientific Affairs during the U.S. Chairmanship of the Arctic Council.

Prior to joining the U.S. Department of State, Eric worked in corporate sales and government relations in the airline industry.  He graduated from the University of California Berkeley with a degree in Political Science and has an MBA from Georgetown University. He is the recipient of several State Department Superior and Meritorious Honor awards and speaks Danish, French, Khmer, Russian and Spanish. Eric is married and has two young daughters.