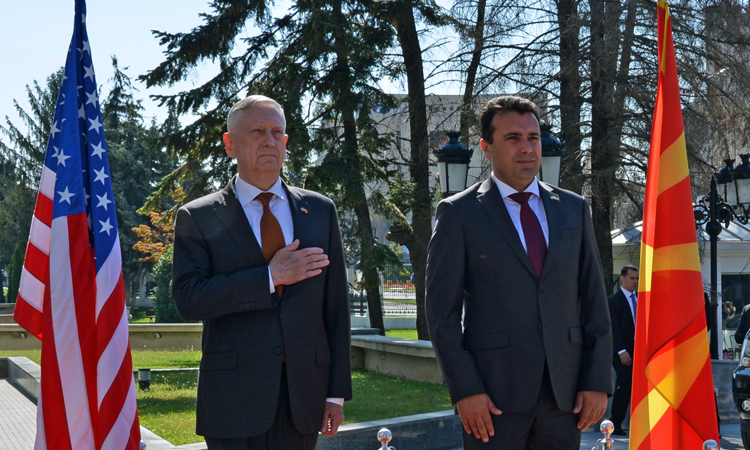 Thank you ladies and gentlemen, Prime Minister Zaev, thank you very much for hosting my first trip to Macedonia as the Secretary of Defense.  It has been a pleasure to meet with you and Minister Shekerinska here and to have our discussions at a time of unique opportunity for your country.  Our productive discussions remind us that our countries’ defense relationship is very strong and is getting stronger every day, and is bolstered, of course, by the democratic values that we share.

The United States recognizes your leadership, Mr. Prime Minister, as an important stabilizing force in the Balkans and beyond.  Your country has proven a reliable security partner and a valued contributor to global peace and security, serving as a leader in regional security initiatives, like the U.S.-Adriatic Charter and the Balkan Medical Task Force, and participating in European Union peacekeeping, United Nations and NATO operations around the world.

Thank you specifically, Mr. Prime Minister, for your continued commitment to NATO’s Resolute Support Mission, where our soldiers stand side-by-side in pursuit of a peaceful and prosperous Afghanistan.  At the same time, your soldiers have earned international respect in a tough environment.  We also appreciate your offer to host U.S. forces at the Krivolak training area in your country.

The close cooperation between our countries is also growing to reflect modern challenges, as we plan to expand our cybersecurity cooperation to thwart malicious cyber activity that threatens both our democracies.

I applaud your tireless efforts to reach the historic Prespa Agreement with Greece.  The United States recognizes this agreement took hard work and patient diplomacy on both sides, compromises on both sides.  And compromise is always hard.  Prime Minister Zaev, I thank you and Minister Shekerinska for your personal leadership to solve this admittedly difficult name dispute.  The Prespa Agreement, alongside key reforms you are implementing under your strategic defense review, unlocks your NATO accession process and allows you, our Macedonian friends, to determine your own future in institutions made up of like-minded countries.

Mr. Minister, your country recently celebrated your anniversary of independence from Yugoslavia, when over 95 percent of voters cast their ballots to “live in liberty,” as your national anthem proclaims.  In two weeks, your citizens will once again “seize the democratic opportunity” to drive your country’s future, to borrow Chancellor Merkel’s words from her recent visit, as you vote in the referendum to move toward NATO accession, as you vote in the most important vote in your nation’s history.  We recognize the complex political choice ahead for your people and we support you, our Macedonian friends, exercising your own sovereign voice and your democratic responsibility to vote.

And as Secretary General Stoltenberg said last week, in joining NATO, you would gain an equal seat at the table of the most successful military alliance in history, alongside “29 other countries committed to protect you and your security,” spurring economic prosperity and increased foreign investment, as well as strengthened security.  As Secretary General Stoltenberg noted, foreign investment from allied countries has doubled in Montenegro since joining NATO.

You would join an alliance in which countries large and small work together to uphold shared principles of national sovereignty, territorial integrity, and freedom from coercion, while others seek to diminish these very values, sowing discord from Syria to Ukraine.

And to echo Secretary General Stoltenberg’s words one final time, “we are ready to welcome your country as NATO’s 30th member,” should you choose that path.

Prime Minister Zaev, thank you again for your warm hospitality.  I look forward to meeting with President Ivanov this afternoon to further discuss what we think is a very bright future ahead for your country.