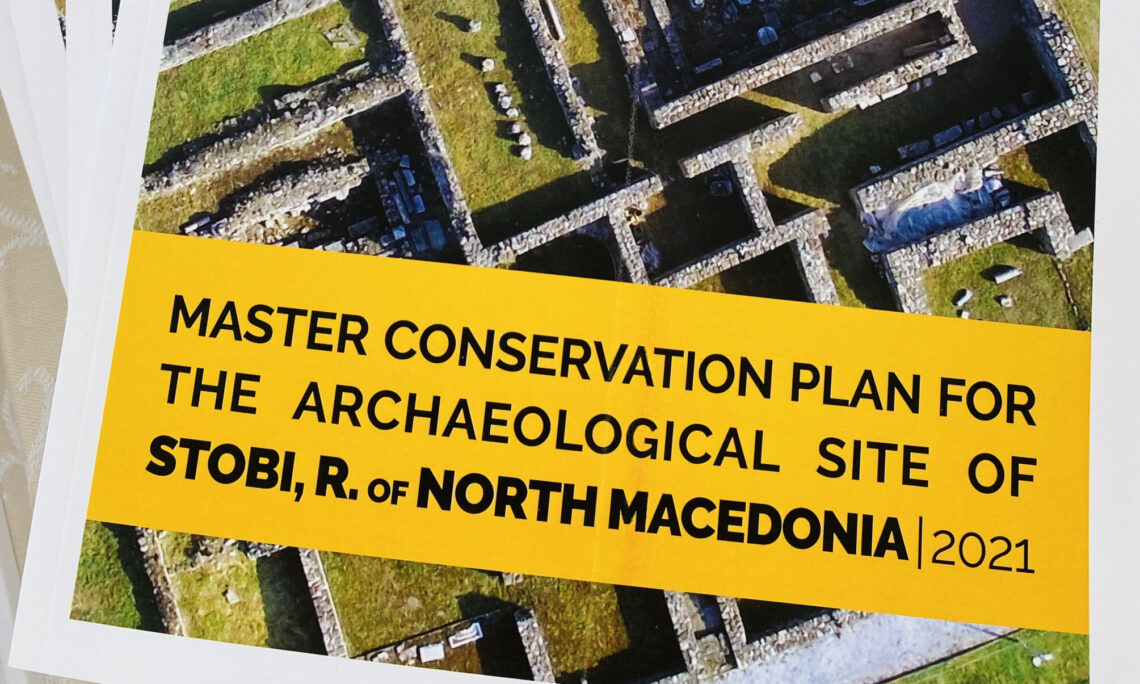 On September 30th, 2021, Ambassador Kate M. Byrnes attended the ceremony for promotion of the Master Conservation Plan for the archeological site Stobi, funded by the J.M. Kaplan Fund from the United States.

The Master Conservation Plan for Stobi was created through a cooperation between National Institution (NI) Stobi and Balkan Heritage Foundation from Bulgaria, with a $100.000 grant of the J.M. Kaplan Fund. Ambassador Byrnes noted the importance of cultural heritage and the U.S. government support through the Ambassadors Fund for Cultural Preservation (AFCP) to include preservation efforts of Stobi; from the mosaics and the marble architectural elements of the baldachin from the 5th century AD, the frescos in the old basilica from the 4th century AD.

Read below Ambassador Byrnes’ full remarks delivered at the event.

Remarks of Ambassador Kate M. Byrnes
at the presentation of the Master Conservation Plan for Stobi
September 30, 2021
Stobi, North Macedonia

Minister Stefoska, Director Perovski, Mr. Vasilev, your excellencies, distinguished guests.  It is a great pleasure to be here with you on the occasion of the presentation of the Master Conservation Plan for Stobi and to acknowledge the continued support that the United States, both through government and non-governmental actors, is providing to one of North Macedonia’s most amazing archeological sites.

This year we are celebrating 20 years of American leadership, cooperation, and support for the preservation of cultural heritage around the world through the Ambassadors Fund for Cultural Preservation. Two decades ago, the U.S. Department of State launched this initiative under then Secretary Albright to show in a tangible way that America values the diversity of cultures, not only in the United States, but throughout the world. Since 2001, U.S. embassies have used this public diplomacy program to promote American values, such as respect for cultural diversity, as well as to spur economic and environmentally sound development, and to empower women, youth and civil society as partners in building a better future by preserving the treasures of the past.

The United States is proud of our partnership with North Macedonia to preserve and protect its cultural heritage over the last 20 years.  From the Painted Mosque in Tetovo to Peribleptos church in Ohrid, to Daut Pashin Hamam in Skopje, the Ambassadors Fund for Cultural Preservation has provided over 1.5 million dollars for preservation and conservation at a dozen sites across North Macedonia.

Here at Stobi we have funded several important preservation efforts since 2003, and as a result, the beautiful mosaics and the marble architectural elements of the baldachin from the 5th century AD, and the frescos in the old basilica from the 4th century AD, are now available for people to see and enjoy.

The American presence in Stobi, however, goes back much further than this program in 20 years.  In 1970, American archaeologists – Dr. James Wiseman and others – worked alongside archeologists from North Macedonia to uncover, research, and conserve the ancient city.  And now, today, the American presence here continues with the support of the American private sector the philanthropic J.M. Kaplan Fund, a champion of social, environmental and cultural efforts. The J.M. Kaplan Fund has long believed in the value of cultural heritage. Whether at home in New York City—where they helped save treasured sites like Carnegie Hall from demolition—or at archaeological sites in North Macedonia, where they help preserve this iconic cultural asset.

I want to acknowledge and commend the cooperation between National Institution Stobi and Balkan Heritage Foundation from Bulgaria for your continued hard work and determined efforts to preserve this extraordinary cultural treasure in partnership with researchers and experts from the countries that are represented here today, and many others around the world.

We will continue to share an appreciation for and support North Macedonia’s cultural heritage and be a partner in your efforts to advance Stobi as a destination for education, archaeological research, and tourism so that generations of citizens from the region, the United States and around the world can come and learn about the important role that Stobi has played in our collective world heritage as we work together to address the challenges of our collective future.   Thank you.