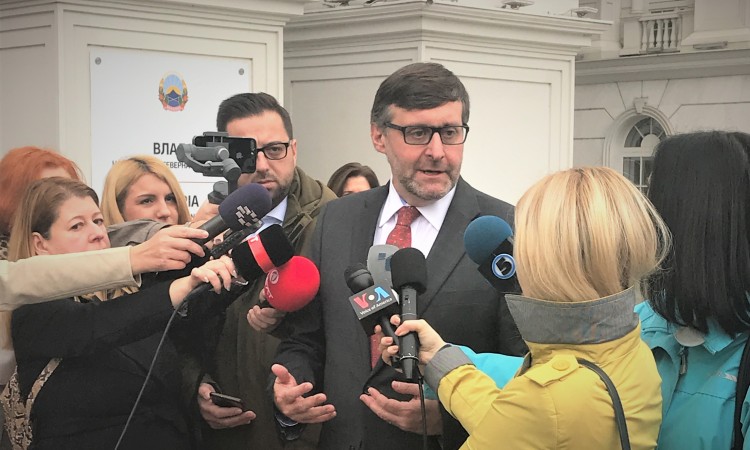 VOA:  Bulgaria is sabotaging North Macedonia’s EU accession talks.  What can the US do, besides urging all sides to solve the dispute outside of the accession process, to possibly change the outcome of the ministerial meeting next week?

DAS Palmer:  Thanks for the opportunity to be here with you today.  We have been long-time supporters of North Macedonia’s European and Euro-Atlantic aspirations.  We were very proud to see North Macedonia become, last year, the 30th member of the North Atlantic Treaty Organization.  Of course, we’d like to see North Macedonia continue on this European journey.  It is a significant step forward when they got the green light for the opening of accession negotiations last March with the European Council.  We very much hope to see an agreement on having the first inter-governmental conference in December, in time for the end of the German presidency.  I think it is important to bear in mind that this is a long term process.  It is going to take many, many years in the process of accession negotiations.  And there are important way stations along the way.  The IGC [Intergovernmental Conference] is certainly one of those way stations.  North Macedonia has done enough, certainly, to qualify for the IGC, and the vast majority of EU member states can clear on that as well.  We are going to continue to work with our European partners to help make the case, and do everything we can to prepare the ground and continue publicly to demonstrate our strong support for North Macedonia moving forward towards joining the European family.

VOA:  Do you believe that Bulgaria is sharing European values by rejecting the right of self-identification of the people of North Macedonia, and would you condemn that type of behavior?

DAS Palmer:  What we’d like to see is to see the EU accession process move forward on the basis of the principles that are encapsulated in the acquis communitaire. North Macedonia is certainly there in the kinds of reforms that are necessary to justify holding the first IGC and we believe the European Union should recognize that progress with an agreement to launch that process.  We very much would like to see bilateral issues handled in bilateral channels.  We understand that here are important issues related to history, language to be worked out between Bulgaria and North macedonia as neighbors, as allies , as partners.  In terms of the EU accession process we would like to see that move forward without bilateral issues being in the way of that process.

VOA:  Speaking of history, the Macedonian people are reacting to PM Zaev’s interview for a Bulgarian media outlet, in which in some way he dismissed the fascistic pat of Bulgarian history in Macedonia.  Do you think that the price for getting into the EU should be forgetting what happened in the past?

DAS Palmer:  I think the price for getting in the EU is clear and it is spelled out in acquis communautaire.  It’s part of the 80,000 pages of rules and regulations, and its phased process.  We would like to see North Macedonia continue with the reform efforts that will open the door to Europe.  As I said, there are bilateral issues that North Macedonia is going to have with neighbors, with members of the European Union.  Bilateral issues can and should be handled in bilateral channels.  The EU accession process should be geared at addressing the reforms necessary to ensure that North Macedonia can be a contributing member of the European Union.

VOA:  In your opinion, can an EU perspective survive  in North Macedonia and frankly in the whole region, because if the country is blocked not over reforms , such as rule of law or the fight against corruption, but over the right to self-identification, which is a value that Europe rests upon?

DAS Palmer:  I think it is certainly important for the European Union, for the credibility of the European Union, to demonstrate that progress on reforms translates into progress in the accession process.   That means that at this point for North Macedonia, launching the IGC is the next stage in this process and one that North macedonia has clearly manifestly earned through reforms.  So we would like to see that move forward.

VOA:  What could be the biggest threat for the country and the region if North macedonia does not start accession talks until the end of this year?

DAS Palmer:  I don’t want to speculate about the future, prognosticate about stuff that’s impossible really to know, but I am confident that the government of North macedonia, the people of North macedonia will remain committed to the European path, independent of what happens over the course of the next couple of weeks or at the European Council meeting in December.  North Macedonia is a European country, it’s on the European path, and the United States will be a partner, an ally and a friend in this process.

VOA:  What are your expectations of next week’s meeting and what should be the next step for the country, if there is no positive decision?

DAS Palmer:  It is my hope that the European Council will agree to start the IGC for both North Macedonia and Albania.  I don’t want to predict what the outcome of that Council meeting will be, but irrespective of what happens in this next meeting, the process of the EU accession, it is a multiyear process, and through it all the United States will be standing side by side, in partnership with our NATO allies–North Macedonia and Albania.

VOA:  Any additional message to the leaders, to the people before next week?