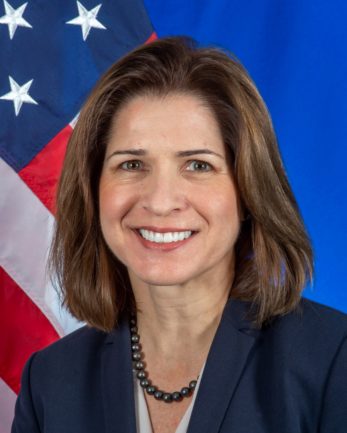 A 26-year veteran of the U.S. diplomatic corps and a member of the Senior Foreign Service, Ms. Byrnes is the Ambassador to North Macedonia.  She served as Deputy Chief of Mission to U.S. Embassy Athens September 2017 – May 2019.  Her previous assignment was Chargé d’Affaires, a.i. at the U.S. Mission to the Organization for Security and Cooperation in Europe (OSCE) in Vienna, Austria, where she had also served as the Deputy Chief of Mission since September 2014.

Previously, Ms. Byrnes held positions at the Department of State Bureau of European and Eurasian Affairs; the office of the Under Secretary of State for Public Affairs and Public Diplomacy; and the Senate Foreign Relations Committee.  She served as Public Affairs Advisor at the U.S. Mission to NATO in Brussels, Belgium, from 2007-2010.  From 2010-2011, she was the Senior Civilian Representative supervising governance and development in eastern Afghanistan as part of the International Security Assistance Force.  She has also represented U.S. interests overseas in Spain, Bolivia, Hungary and Turkey.

A resident of Sarasota, Florida, Ms. Byrnes holds a Bachelor of Science (Foreign Service) in International Relations and a Master’s degree in Policy Management, both from Georgetown University.  She is married to CAPT Larry Scott Gage, USN (Ret).