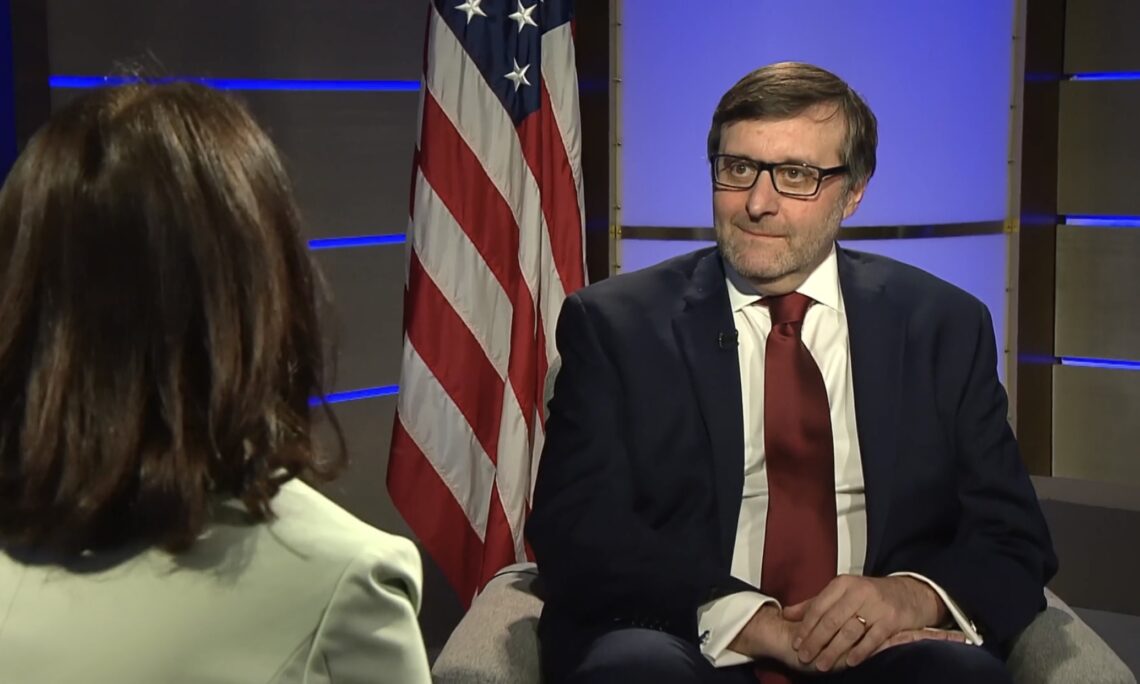 In an interview with VOA Macedonian, which coincided with North Macedonia’s first anniversary of NATO membership, DAS Matthew Palmer spoke about current issues the country is facing on its Euro integration path, including relations with neighboring Bulgaria, as well as internal political issues.

Below is a transcript of the interview.

VOA:  It’s been a year since North Macedonia joined the NATO Alliance.  How is the country different today, in your opinion?

VOA:  The latest corruption perception index shows that corruption is on the rise in North Macedonia, the highest since 2001.  No other NATO allies invest in a country if there is no robust fight against corruption.

DAS Palmer:  First of all let me underscore that NATO is an alliance, not just of interest, it is an alliance of values, and the fight against corruption is one of the fundamental values for members of the NATO alliance.    We expect North Macedonia, the government of North Macedonia to step up its game in combatting corruption, the people of North Macedonia expect that from their government as well.  The better job the government does in fighting corruption, the more they get that problem under control, the more other countries including NATO allies will look at North Macedonia as a place where they want to invest, a place where they can believe their contracts will be honored, where bribes will not be asked of them, where they can get a reasonable return on investment, in an environment in which there is predictability, including in judicial (inaudible).

VOA:  The President of Bulgaria and the Minister of Defense both threatened to send security forces to North Macedonia to respond to alleged violations of the rights of the Bulgarian diaspora in the country, and to remove inscriptions from monuments.  This literally means that one NATO member state is threatening another NATO member state.

DAS Palmer:  I think what we’d like to see is North Macedonia and Bulgaria working in unison to resolve issues in the bilateral relationship, keeping those issues out of multi-lateral formats including NATO and in particular, right now, the European Union.   Certainly, nobody likes to see one NATO ally, one NATO partner threatening another.

VOA:  if I can also follow up on the Bulgarian issue, Bulgaria and North Macedonia are continuing the official talks in April regarding the Bulgarian veto of the country’s EU accession process.  Do you think there is a political climate for Bulgaria to change its mind?

DAS Palmer:  I think what we have is an opportunity for Skopje and Sofia, for North Macedonia and Bulgaria to sit down together and work through these issues as neighbors, as allies, as partners.  I am confident that a solution can be found to bilateral challenges in a bilateral dialogue, without having to bring them into the EU accession process.

DAS Palmer:  We would certainly like to see that.  We feel a sense of urgency.  We look at both North Macedonia and Albania as having earned the first inter-governmental conference, the formal opening of EU accession negotiations.  We would very much like to see that this year.

VOA:  The lack of practical support and pressure on Bulgaria by the other EU member states is obvious.  Do you agree?

DAS Palmer:  I am sorry, can you ask me that question again?

VOA:  The practical pressure on Bulgaria by the other EU member states is obvious.  Do you agree with that?

DAS Palmer:  I think there is broad support amongst EU member states for North Macedonia and Albania moving forward on their EU accession track[s] as was agreed, and it is unfortunate that there are obstacles, that there is a blockage of that process.  We would like to see the obstacles removed I think most EU member states would agree that they’d like to see those obstacles removed and North Macedonia move forward in the accession process.

VOA:  What would be your message to them?

DAS Palmer:  My message to the EU member states at this point would be to take the steps necessary to allow North Macedonia and Albania—two countries that have done the hard work, done their homework, made the reforms that are necessary—[to] allow them to move forward, hold the IGCs and get this process firmly on track.

VOA:  [The] EU failed to distribute vaccines to North Macedonia and other countries in the Balkan region.  The countries turned toward Russia and China.  Do you believe that Russia and China will use this moment to spread malign influence and what would be the long-term consequences for the EU perspective in the region as a result of this?

DAS Palmer:   I think that is certainly a risk.  The United States is not engaged in this kind of vaccine diplomacy.  Russia and China I think are using the vaccines as instruments of influence in a manner that I think is deeply problematic.  What the United States is doing is supporting the multi-lateral mechanism to ensure the vaccines are available to all who need it, in particular the COVAX mechanism.  We have contributed two billion dollars to COVAX.  We have another two billion dollars that are in the pipeline, so the United States is contributing in total four billion dollars to this effort, and the COVAX vaccines are beginning to flow.   I am hopeful that in the weeks and months ahead, North Macedonia and other countries in the Western Balkans, in fact countries around the world will be able to benefit from the COVAX program and have necessary access to safe and effective vaccines.

VOA:  North Macedonia is set to organize its census soon.  The opposition however announced it would try to block it.  Would you comment on why it is important for the census to be carried out?

DAS Palmer:  It has been an awfully long time since there was a census in North Macedonia.  The law has been passed. At this point what remains is largely a technical, administrative process.  We are confident that North Macedonia would conduct the census consistent with the standards established by Eurostat, and then it is very important for the government to have available, accurate data about who is living in the country in order to provide goods and services.  That’s something that every country needs to be in a position to do.

VOA:  Should the opposition be held accountable for blocking the process?

DAS Palmer:  What we would like to see from the opposition, not just in North Macedonia but across the Balkans, is that they are operating within the framework established by the democratic institutions in the country.  So, it is important that the opposition shows up for parliament, does their job, represents the interests of their constituents and the people who elected them to reflect and represent their interest.  Boycotts, blockades, not doing their job- none of those are conducive to progress.  We have a shared vision, a vision broadly shared by the United States, by our European partners, by the government and by the opposition in North Macedonia- a country that is stable, peaceful, prosperous, member of NATO, that meets its obligations, and on its way towards membership in the European Union.  We all need to work together to secure that goal.

VOA:  How do you see the US-North Macedonia partnership this time next year, on the second anniversary of NATO membership?