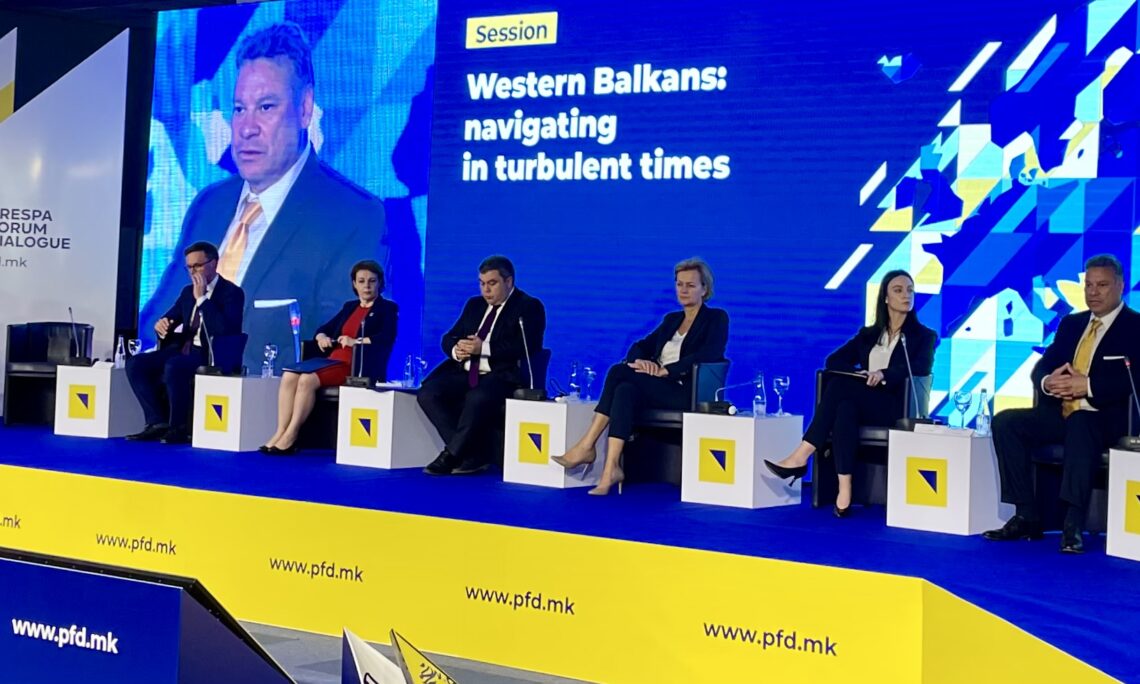 Thank you very much.  First of all I want to thank the organizers of the conference. I want to thank North Macedonia for this tremendous initiative to bring people together to discuss issues and to have a common framework going forward.  The important thing, I think, that people should understand from this conference, and from this panel in particular, is that everybody is united on the way forward, that is Euro-Atlantic integration.  I don’t think that you will find anybody on this panel who disagrees with it, and I don’t think you will find anyone even within the region who disagrees with that as a way forward.

When we talk about the challenges in the Western Balkans that are facing us right now, at this historical period, there are many, but rather than focus on those I want to focus on the opportunities that are here.  Quite honestly, the opportunities are really our unity and our values.  That is what has propelled the Euro-Atlantic community to be the most successful in history, and that is what is going to move us forward in helping resolve some of the differences, and some of the issues that are facing the region.

From our perspective, of the United States, we are strongly supportive of the European project.  I have to say that in my lifetime, it has been the most dramatic, helpful and important initiative and development in history, that is, the European enlargement to include former adversaries of the Warsaw Pact, and the simultaneous enlargement of NATO to include former foes.  What Europe has done, is it has actually exported peace as far as it could, as quickly as it could.  And every country that joined the European Union became more stable, more prosperous, more peaceful, and more democratic. Even the idea of becoming a candidate, not even a member, has created this enormous positive pressure for reform, and that is really what this is all about, and we can’t lose sight of that.  We can’t lose sight of the fact that just being a candidate has created tremendous benefit for the people. But I also frequently have to remind some of my European friends, not those in the structures but those in the public, that the Western Balkans are part of that project, that the Western Balkans are geographically, economically, culturally and historically European, that you share those values, that you have been solid partners in NATO, and you have been great bilateral partners to the United States, and that is an opportunity as well.  More than that, the tremendous opportunities that these new generations offer for Europe, from the Western Balkans, in terms of energy, entrepreneurial spirit, and a desire to be part of that larger community, is also an opportunity.

Moderator:  If I may, a follow up question on this. We have heard about all these settings, but how do we ensure synergy among all of them, and also inclusivity?

DAS Escobar:  I know that you are referring to the Open Balkan so I will address that directly.  The policy of the United States is to encourage, to support, any initiatives that bring you closer to Europe, and that bring the region closer together.  We support the Berlin Process, we support the common regional market, the CEFTA, and Open Balkan, as long as it is focused on European integration, and as long as it remains open to all of the countries.  Seventy percent of the economy of the Western Balkans is linked to Europe, to the European market, and the rest of it, almost all of the rest of it, is linked to the region.  So both of those processes have to take place within the same framework, that is a framework of rule of law, open and transparent markets, and inclusivity.  As long as Open Balkan fulfills that, it has our support.  But it is not the only initiative that we support.  We support all of the initiatives of the region that bring you closer.