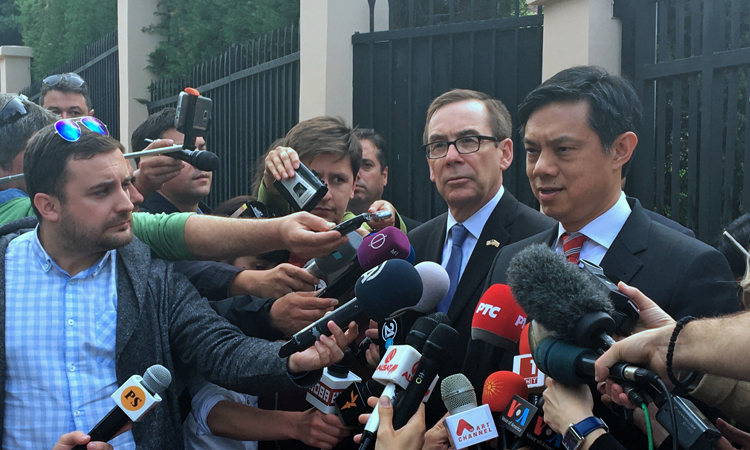 Hello, so sorry to keep you waiting. I’ve had a full day of very constructive meetings. And it’s been about a year since I was here last.  It’s always wonderful to be back in Macedonia.  I’ve been visiting your beautiful country since March of 1997, and I’m very happy to say that the country has come a long way since 1997.  I’m also happy to say that policies of the United States towards this region, the western Balkans, towards Macedonia in particular, remain to strongly support the integration of the region, of Macedonia, in Europe; to support the legitimate wishes of the country, of its citizens, to have a more stable, democratic, and prosperous future.  We believe very strongly that we share this goal with the citizens and also political leaders of the country, and we look forward to continuing to work with the political parties, government, the Parliament, civil society to advance this goal.

I think you all know that we are concerned and we believe it’s unfortunate that recently the progress of Macedonia towards the goal of a more prosperous future integrated in Europe has not been as positive and fast as it should be, largely because of an ongoing political crisis that now has been continuing for over two and a half years.  In particular, it is unfortunate that the political leaders of Macedonia have been unable to form a government based on the elections that you had in December, elections that were observed and considered to be credible by the international community, and more importantly, elections that were accepted, the outcome of which was accepted by all political parties in Macedonia.

And even more unfortunate and alarming is the very unfortunate incident that took place in the Parliament last week, last Thursday, when members of Parliament were violently, cowardly attacked for committing no greater offense than electing by majority vote a new Speaker of Parliament.  Ambassador Baily and his team, the United States has strongly condemned these attacks and we call upon the authorities of this country to fully investigate, to promptly investigate the attacks and to hold those who were responsible accountable and to bring them to justice.  We believe it’s very important for the political leaders of the country to find a way to end the political crisis, to end the impasse that they have had now for two and a half years.  We feel that, as we have stated before, it is very important for the leaders to find a way to allow the majority in Parliament, the coalition of members of Parliament that have a majority, to propose a government and a government program.  We understand there are concerns about the composition of the government program.  Like in all European democracies, we believe that whatever is proposed by the majority should be considered seriously in Parliament, should be debated in Parliament, and it should be voted in Parliament.  We believe that is the proper place to have this debate – in the legislative body, not outside.

I would say that it is also, we feel, important for the country to come together, for the political parties, for civil society, for all citizens to work together in the spirit of cooperation, to work together to mend wounds, not only those that occurred last Thursday in Parliament, but wounds from political disputes that have lasted for too long.  And, the way to do that is to form a new government, a government that is going to be committed to the kinds of reforms that will bring this country closer to European integration.  We are committed – Ambassador Baily and his team, the entire Embassy, the State Department, USAID – we are committed to helping your country complete the reforms necessary in order to join the European Union, and if you decide, to join NATO.

The next step, we feel and based on my conversations today with political leaders in Macedonia, we feel there is an understanding that it is now necessary to end this impasse, to end the crisis and move forward.  I am happy to take your questions.

Question: Are we closer to a new government today than yesterday?

DAS Yee: That is something you will have to ask your elected leaders. That is their decision, not ours. I believe, based on my conversations, first of all, that all of the political leaders in this country are committed to a democratic unitary Macedonia, they are committed to the Constitution of Macedonia, they are committed to a prosperous, more stable future for all the people of Macedonia. But, it is important now to act on that aspiration, to move beyond the words, to move beyond Parliamentary procedures, and to make decisions that are going to allow the country to end this crisis and to start adopting reforms that are needed to bring a better future for the country.

Question: You met the new Parliament Speaker.  Does that mean that the United States has no doubts about recognizing him?

DAS Yee: What is important is what the political leadership of this country does in ending the crisis.  That means, in our view, approving a new government, creating a new government and a new government program so that it is able to pass laws and reforms, that it is able to pay salaries, to ensure that the business of this government is performed in a timely and responsible manner. Of course, you will have noted that the United States has stated publicly that it will work with the Speaker of Parliament Mr. Xhaferi. Also, the European Union has indicated the same, as has NATO and Berlin. So, we are not the only country that believes that Mr. Xhaferi should be given every opportunity to demonstrate the leadership necessary to begin the steps necessary to form a new government, a new government program that will move the country ahead.

Question: Our President repeated that the Tirana document is the problem for forming a new government, and the process is blocked for months.

DAS Yee:  As I mentioned earlier, we understand there is a difference of opinion among parties about what the priorities of the new government should be, and this is normal for any country that is facing a number of challenges, including how it can come closer to the European Union and to NATO.  More importantly, how to create new jobs and opportunities for its young people.  The proper place to have this debate is in the Parliament.  So, if any political leader has concerns, has views, has objections, he or she should either express them in the Parliament, if he or she is a member of Parliament, or to make sure that his or her representatives are informed about what their concerns are.  But, we see no reason why the majority in Parliament should not be given opportunity to try to form a government and to have this debate in Parliament, where it belongs.

Question:  I wanted to ask you, because someone from the Embassy did not clarify the question – who specifically authorized your visit?  Was it some specific person higher than you, was it yourself, was it by invitation?

DAS Yee:  My name is Hoyt Yee, I am the Deputy Assistant Secretary for Europe, and I think all of you know that the United States Government is a serious organization, that we work on basic bureaucratic principles, especially when they are involving the relations with foreign governments, that they are based on the principle that the leadership, the responsible authorities are aware of and approve of what the people below them are doing, and that is the case with my visit here.

Question:  Did you receive guarantees from VMRO that there will be a peaceful transfer of power?

DAS Yee:  In all of my meetings today I was pleased to hear from every leader, every representative, their commitment to a democratic, unitary state, and to the basic democratic principles of a peaceful transfer, of peaceful resolution of conflicts, and of finding solutions that will be inclusive, that will not leave anyone outside, will not leave anyone isolated, will bring the country together, and more importantly that will move the country towards the goal that all of its citizens—at least it appears to me—share, which is a future in Europe.

DAS Yee:  I think in politics it is very important to have an open discussion of differences of opinion between the political parties that are represented in the Parliament.  So, on this issue, I think it is legitimate for parties to express their concerns, but these should be resolved in accordance with normal democratic principles.  In other words, if the majority of members of Parliament are in favor of Mr. Xhaferi, they should have the right to elect him.  If there are concerns about Mr. Xhaferi’s program or what he is doing as Speaker, I think parties have the right to raise these in Parliament, to have their concerns addressed.

Question:  There are thoughts that sanctions are an option from Washington and Brussels towards politicians for blocking the processes.  Have you tackled these issues?

DAS Yee:  Let me say that the United States and Macedonia are partners.  We believe very much in the principle that partners have shared interests, shared values, and a shared responsibility.  When partners are working together on common efforts, whether it is a peacekeeping mission, a commercial venture, or the resolution of a conflict, it is important that partners can rely on each other to meet their commitments.  One of the principles that Secretary Tillerson has made very clear, that in our relations with our allies or partners or adversaries, we intend to hold them accountable to what they say and what they do, and I do not want to go into more details about how we will do that but I think you know the United States takes seriously what it says, what it does, and what it is willing to do to help its partners.

Question:  At the meeting with Gruevski did you –unintelligible—him the possibility of him being the new leader of the opposition?

DAS Yee: You will have to ask Mr. Gruevski what his intentions are.  Again, what I found in my meetings today and yesterday was, first an understanding from all the leaders of the seriousness of the situation, of the need to end the crisis and to move the country forward.  What role each of the leaders will play in this resolution and in the new government will depend on negotiations and discussions between the parties.  What we have explained, again, to the leaders, is that the United States stands ready to help this country achieve its goal of a more prosperous, stable, and democratic state, and that those who wish to achieve their goals of being closer to the European Union and NATO, they will find very willing partners in the United States.  Thank you.