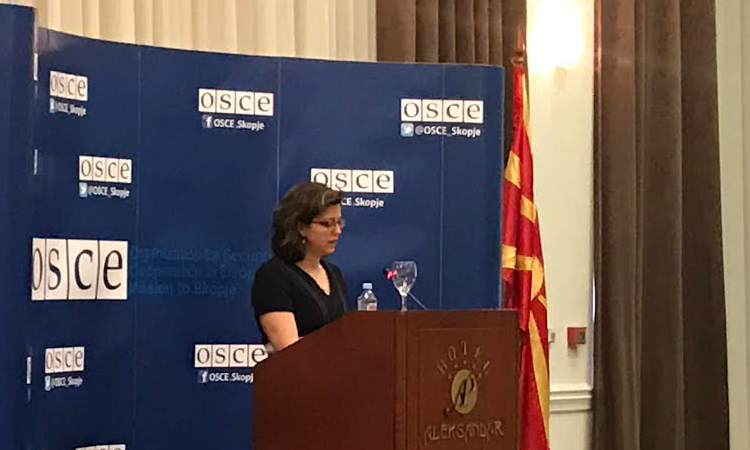 Remarks at Closing of MJA Conference “Towards a European Judiciary:  Preconditions and Challenges”
March 29, 2019

I am honored to celebrate Judiciary Day with all of you.  In any democracy, the judiciary plays a vital role in creating the grounds on which that democracy will succeed or fail.

Citizens in a democracy need to be confident they have equal access to unbiased justice.  They also need to be confident justice will hold people equally accountable, no matter their position or connections.  As North Macedonia looks to finalize its NATO membership and launch its EU accession, the eyes of the world are on you, particularly on your action in enhancing the laws and practices that guarantee rule of law and blind justice.

We have seen some significant progress in this area.  The January 17 adoption of the Anti-Corruption Law was a truly notable achievement.  You now have a functioning State Commission for the Prevention of Corruption and Conflict of Interest, which has greater independence and increased power to inspect the activities of public officials and political parties.  And on March 4, Parliament adopted three important reform laws that should provide for a stronger judiciary, more proportionate justice, and better human rights protections.

And right now, the parliament is discussing important new legislation for the Public Prosecutor’s and the Special Prosecutor’s Offices.  These offices are at the very heart of your country’s efforts to tackle and prosecute corruption and restore the public’s faith in an independent justice system, and their capabilities and independence should be secured.

Judicial reforms cannot be just an exercise on paper.  Adopting fair and robust laws is important, but reform needs to also be about changing practices, habits, and assumptions.

Integrity is the key ingredient that underpins the rule of law, and it starts with all of you here today.  The only way forward is to continue strengthening democratic checks and balances, bridging the gap between laws and their implementation, and supporting public accountability.

Civil society, media, and the public have to guard against backsliding and demand greater accountability and progress.

The U.S. Embassy is your partner in this.  We recently provided audio recording equipment for all courtrooms in Skopje’s Basic Court 1 to improve accountability and transparency.  We partnered with the Judges Association to establish the first ever Judicial-Media Council to build trust and cooperation between judges and reporters, which means the public is better informed about court happenings.

We partner with the Academy for Judges and Prosecutors to provide trainings and study tours to improve the experience and professional skills of legal professionals across the country.  And we support investigators, prosecutors, and judges who request cooperation from institutions in the United States to pursue the application of justice.

Distinguished guests, there are no shortcuts when it comes to upholding the rule of law and fighting corruption.  It is about serving all people in North Macedonia who demand justice, equality before the law, and legal security.  That is hard, but important, work.

I congratulate you on Judiciary Day and urge all of you to use every day, in every courtroom across this country, to positively transform rule of law in North Macedonia.