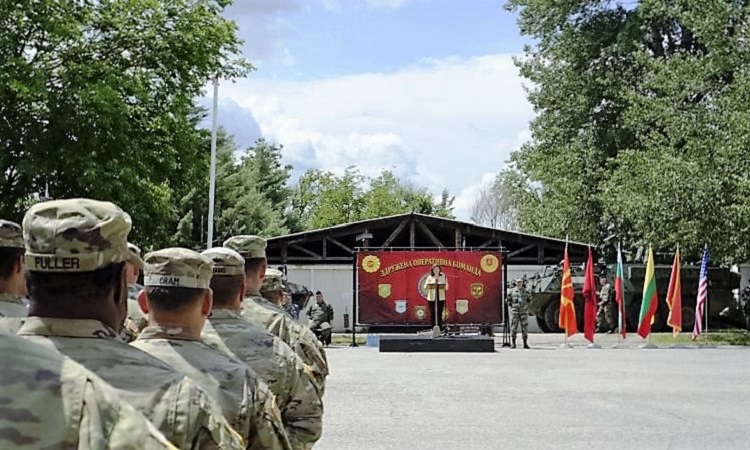 Remarks at Opening of “Decisive Strike” Exercise at Krivolak

Thank you Deputy Minister Maksuti, Major General Arsovski, Deputy Minister Umbrasas, Ambassadors, soldiers, it is a pleasure to be here to launch the Decisive Strike exercise!

I want to thank and applaud North Macedonia and the Army of the Republic of North Macedonia for hosting our American soldiers and NATO allies here at Krivolak this month.

You worked hard and planned carefully to make this happen.  It took many hours and days of consulting and coordinating with U.S. Army Europe and the Pennsylvania National Guard.  But, Decisive Strike is finally happening and what an impressive feat it is!

Over the coming weeks, over 2,700 soldiers from six different countries will work together to conduct this exercise.  Multilateral exercises like Decisive Strike play an important role in enhancing our joint security.  They ensure our armies can communicate and operate jointly.  They also connect our soldiers, building a common understanding and personal bonds that last and make us all stronger.

Tomorrow, President Trump and other Western leaders will mark the 75th anniversary of the Normandy invasion, D-Day, which began the liberation of Europe in World War II.  President Trump will honor the sacrifice of the over 10,000 Allied soldiers who gave their lives on that day in support of freedom.  At the time, U.S. President Franklin Roosevelt said of those soldiers, “They fight not for the lust of conquest.  They fight to end conquest.  They fight to liberate.”

To execute D-Day, militaries of different nations needed to work together.  Operation Overlord was an exceedingly complicated military endeavor that required the ultimate joint, Allied coordination and execution.  It is humbling to walk the Normandy beaches and to see the scale and complex nature of the D-Day invasion.  D-Day would not have succeeded if the Allied militaries had not planned and exercised jointly.

From D-Day and the Allied efforts to liberate Europe was born the principle that like-minded countries needed to cooperate and unite to protect jointly our nations and our freedom.  Our shared values – democracy, individual liberty, and the rule of law – are enshrined in the Washington Treaty that formed the NATO Alliance.  Two months ago, celebrating the signing of this treaty, Secretary Pompeo highlighted that NATO ushered in an unprecedented 70 years of peace and prosperity during which we realized a “fuller and happier life for our citizens.”

As we prepare to welcome North Macedonia as the 30th member of NATO, it is appropriate that Decisive Strike is taking place here, in Krivolak, in the Republic of North Macedonia.   This exercise is a powerful example of how your forces are preparing themselves to be a NATO force, ready to work with NATO allied militaries to address future threats.  It is also evidence that North Macedonia is already contributing to the Alliance.

I want to thank Colonel Wegscheider and the Pennsylvania National Guard, and soldiers from the Colorado National Guard and U.S. Army Europe for traveling far from your homes to participate in Decisive Strike.  It is an honor to greet you here at Krivolak.  Just as your predecessors trained and fought side by side with Allies in liberating Europe 75 years ago, you are contributing to the security of the United States and our European allies by participating in this exercise.  I thank you for your dedication and commend you for the work you will do and the friendships you will build with our allied partners in these coming weeks.

Thank you and may you all enjoy and benefit from the Decisive Strike exercise!