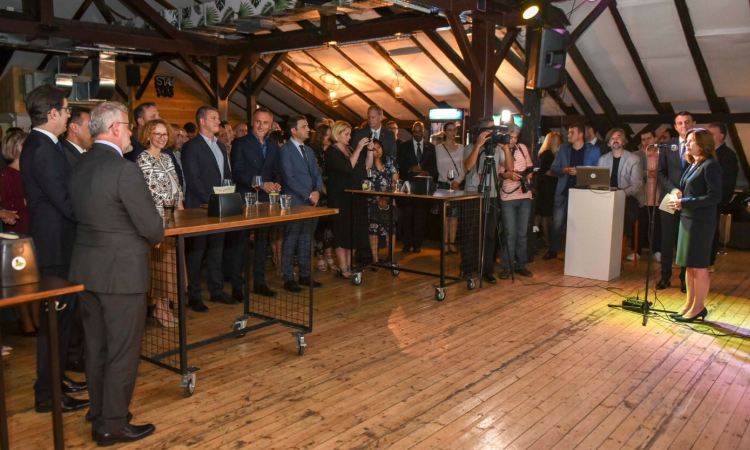 Honorable Ministers, Members of Parliament, members of the judiciary and political party leaders,

Representatives of the media,

Friends from the diplomatic corps,

It is an honor and a pleasure to join you here tonight.  Not often does such an auspicious group of people gather in one place, but tonight I think it is quite appropriate, given the purpose that has brought us here – celebrating the work of 360 Degrees and its partnership with the United States these past three years.

The concept behind 360 Degrees was to bring together people of different perspectives in order to hold a healthy exchange of opinions on the various issues impacting the people of this country.  So it is only right that we should have under one roof here tonight key figures representing various parties, governmental bodies civil society, and the media—all critical elements that together comprise the institutions that give your democracy its vibrancy.

Tonight we are not only celebrating the accomplishments of our partnership with 360 Degrees.  We are also recognizing the critical role the media plays in a free society—providing the checks and balances, and guaranteeing the accountability, that help to solidify the societal bonds between the governing and the governed.  They do this by investigating, reporting, and questioning all matters of governance, probing for the truth, facilitating dialogue, and, yes, also spotlighting the successes when they occur.  A strong, professional and fact-driven media is at the very heart of both of our democracies.

I want to take a moment to say a few words specifically to the journalists, and perhaps the aspiring journalists, in the room.  I am so pleased to see the degree to which free, open, and fact-based journalism is becoming a key value in this country.  You play an essential role in fighting disinformation, identifying corruption and shining a spotlight on societal wrongdoings. I laud you for the brave work that you are doing, and encourage you to continue. And please be assured, the United States will continue to stand with you.

We at the U.S. Embassy are so proud of our partnership with 360 Degrees. Their investigative journalism covering the spectrum of issues impacting on the public good—from environmental protection to the fight against corruption to the efforts to join NATO and European Union—is testament to the courage, integrity, and professionalism of all who have been behind the program’s production these past few years.

These aren’t just kind words or platitudes—they are backed up with solid evidence.  The Anticorruption Commission has so far initiated five investigations in response to stories first aired on 360 Degrees.  And due to another investigative report, the Ministry of Environment has adopted a plan to clean up the toxic waste at the old Ohis Factory and surrounding areas.  These are just two of the excellent examples of how journalists can and should ensure accountability and represent citizens’ concerns.

Equally important, 360 Degrees has demonstrated its commitment to giving a voice to marginalized groups, featuring stories about people with disabilities and presenting their difficulties in society, promoting LGBT rights, and protecting human rights.

I would also like to take this opportunity to congratulate all of the participants who took part in the debates, presenting your views, whether agreeing or disagreeing with the each other, on the most important challenges facing this country today.  Programs like this demonstrate the importance to society of meaningful debate, in presenting issues from different points of view to engage the public, provoke thinking, and create space for civil discourse.

In conclusion, I think that the fact that so many of you have turned out for this event tonight is indicative of how much we all value the role that 360 Degrees has played, and is playing, in North Macedonia. We are pleased to partner in efforts such as this one and although this specific project may be concluding, we will continue partnering with you to further strengthen the media and to help solidify the institutions that are leading North Macedonia towards a hopeful and promising future.

Once again, my sincerest appreciation to our partners at 360 Degrees for their commitment and hard work, and a thanks to all of you who came here tonight as a sign of support for the role of a free press in North Macedonia.