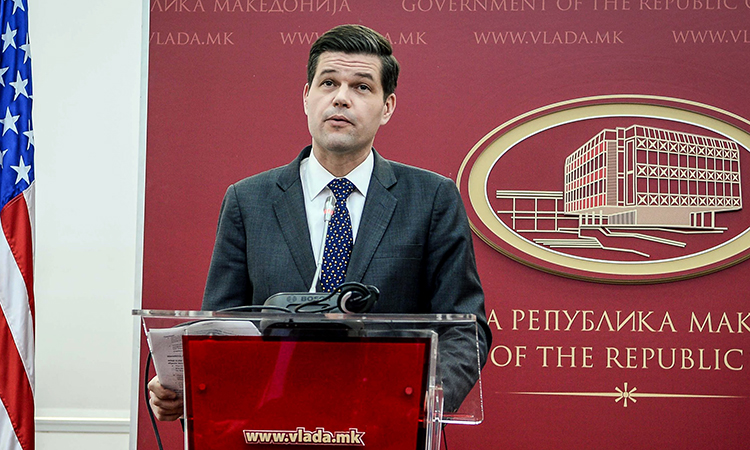 Thank you Prime Minister.  I want to express my gratitude for Prime Minister Zaev’s hospitality and having me here today.  I am happy to be in Macedonia on my first trip to the Balkans in this role.  We had a very good discussion today.  We talked about Greece’s relationship with Macedonia and the way forward there.  We talked about the regional security environment,strengthening economic relations between the United States and Macedonia, and, more than anything, we talked about Macedonia’s path to NATO and the European Union.

I underscored in my meetings today, and I will underscore it again here, the U.S. support for Macedonia as a regional partner and ally, and expressed our country’s appreciation for Macedonia’s contributions to NATO missions, to operations in Afghanistan.  I think Dragoon Guardian was an example of the closeness of our relationship, and I know the high regard with which the U.S. military holds their counterparts in Macedonia.  I also reiterated U.S. support for Macedonia on its Western path of reform and eventual EU and NATO membership.

On the name issue, I want to say that the U.S. supports both countries’ efforts to find a joint solution.  Current conditions are better than they have ever been, and we want to make the best of those opportunities.  It’s very important for Macedonia and Greece to proceed on the path that they determine and have the space to negotiate, but I want to be clear that the United States supports them in that process.  Also, I want to be very clear here that the door to NATO membership remains open and reiterate that the U.S. stands by the 2008 Bucharest Summit pledge.  I appreciate the strides that Macedonia has made in building a strong democracy.  The United States supports Macedonia on this path and will be closely engaged with Prime Minister Zaev and his team, Mr. Dimitrov in the days ahead.

So thank you for having me here.  We’re very pleased with the relationship that the United States has with Macedonia.

Question:  What was exactly the message you delivered to the Government, considering that the NATO Summit in June is approaching, regarding the name dispute, and what is your position on Greece’s demand for Macedonia to change its Constitution?

A/S Mitchell:  Thank you for that question.  The message that I’ve conveyed here is that the United States supports Macedonia and Greece in their efforts to find a joint resolution to this issue.  The only durable solution would be a joint solution.  I think Macedonia has taken tremendous steps forward, and we are closely engaged with our Greek counterparts.  I think they’ve [Greece] taken gigantic steps as well.  So, we are happy with the progress that has been made.  I think there is a tremendous opportunity there, greater than any that we’ve had.  As for NATO and the Summit, we see that coming up on the horizon.  At the same time, nothing about all this is specifically tied to an event or date.  I think we have a big opportunity; we have some milestones coming up that we can relate to in terms of how we mark our progress, but U.S. commitment to Macedonia in this is to finding a solution that paves the way to NATO and the EU.  That’s been our commitment for some time and will continue to be our commitment and is not timed to a specific date or event.

Question:  Will American diplomacy be included if [name] negotiations get complicated in any way?  Can we expect your direct help in the process?

A/S Mitchell:  Thank you for the question.  Let me say, the United States has been engaged for some time, and we will continue to be engaged.  I think we have to learn from past experience, and we have to size the timing and nature of our role to suit the circumstances.  I can assure you we take a very active interest, strategically and politically, for all the principles that we are fighting for in the Balkans from a NATO and EU perspective.  You will see the U.S. strongly committed throughout this process, and you’ll see myself and the administration committed to helping both sides.  At the same time, we acknowledge that the only solution that will last is one that the two parties are going to work out between themselves.  And we are encouraged in that regard to see the steps that Macedonia has taken and Greece has taken.  So, we want to be supportive; we want to be supportive in the right way.  This is not a decision that we can make for you or for the Greeks.  We think you are on the right path and we want to encourage that in the right way.  But I can assure you that we will be very hands on in our support and our engagement.