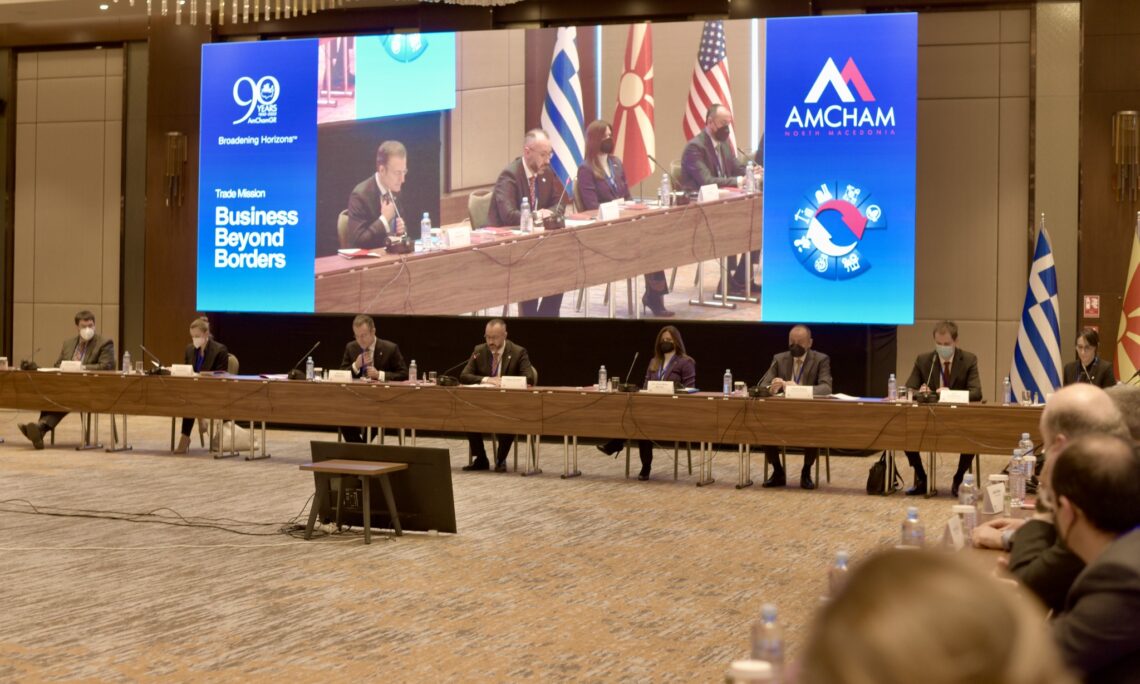 Ambassador Byrnes attended the “Trade Mission: Business Beyond Borders” event, organized by the American Chamber of North Macedonia and the Greek American Chamber of Commerce, which aims at supporting trade and businesses in North Macedonia and Greece, while strengthening bilateral relationship between the two countries.
Read below Ambassador Byrnes’ remarks:

I am so pleased that this long-awaited and important event finally came together and that the United States Embassies have been a partner in making it happen with the American Chamber of Commerce North Macedonia and the American-Hellenic Chamber of Commerce.  To our Greek friends, welcome.  Deputy Prime Minister Bytyqi, your presence is a clear indication of your government’s commitment to regional cooperation.  The benefits of this regional cooperation are broad and deep, touching not only the business sector but also the citizens of this incredibly vibrant region.  Thank you.

The fact that this trade mission is happening is truly notable.  Five or six years ago, such an event was almost unimaginable.  Just this morning, Greek Foreign Minister Dendias hosted a working breakfast for North Macedonia on the sidelines of the EU Foreign Affairs Council.

With the perspective of having served both in Athens and now in Skopje, I want to emphasize that this event is tangible evidence of the remarkable progress in the bilateral relationship between North Macedonia and Greece that your governments and your people have built in the post-Prespa era.  The Prespa Agreement opened the door for a brighter future characterized by regional security, stability, and prosperity.

As a partner in the region—and as a NATO Ally—the United States has a vested interest in seeing this relationship succeed.  This trade delegation is an important piece of that success.  There has been real progress in energy, infrastructure, trade and investment.  Our three countries are stronger together.

As a region, the Balkans is the fastest-growing economy in Europe.

Building a true regional market in Southeast Europe will draw further interest from American industry, which is leading the movement to diversify global supply chains.  The United States is committed to supporting your efforts to strengthen regional cooperation.

Deeper economic integration is indispensable for sustainable growth.  There are vast opportunities for U.S. businesses, and we continue to encourage all Balkan countries to strengthen rule of law, fight corruption, and increase transparency to expand investment opportunities.  The reforms involved will further increase prosperity, allow for sustainable investments in clean energy, and stem the brain drain by creating well-paying jobs.  They will also reduce politically driven investment from outside actors and build the foundations for good neighborly relations and stable governance.

Why does this matter?  Prosperity is a worthy goal in and of itself, but there is more here.  Today you are in the pursuit of joint prosperity for citizens of both your countries, and that is key.

We have stark examples in the world today of the choices before us.  On the one hand, we can see the European Union as a success story created by former rivals, devastated by two world wars.  They eventually laid aside their grievances and chose economic cooperation.  Their citizens—and the world—are clearly the better for these bold decisions.  Once-bitter enemies have become allies and partners, whose citizens are free to live and prosper in peace.  North Macedonia is on the doorstep of becoming a formal part of the success story – a threshold we hope to see them cross very soon.

Russia’s invasion of Ukraine is a brutal contrast, an appalling display of what happens when one side thinks it has more to gain by fighting than by trading. The people of both countries are now caught up in catastrophe, in a human tragedy on a massive scale.

And here we are, in the Balkans, with many paths and choices before us. The region’s own recent history is a not-so-distant reminder of the stakes.