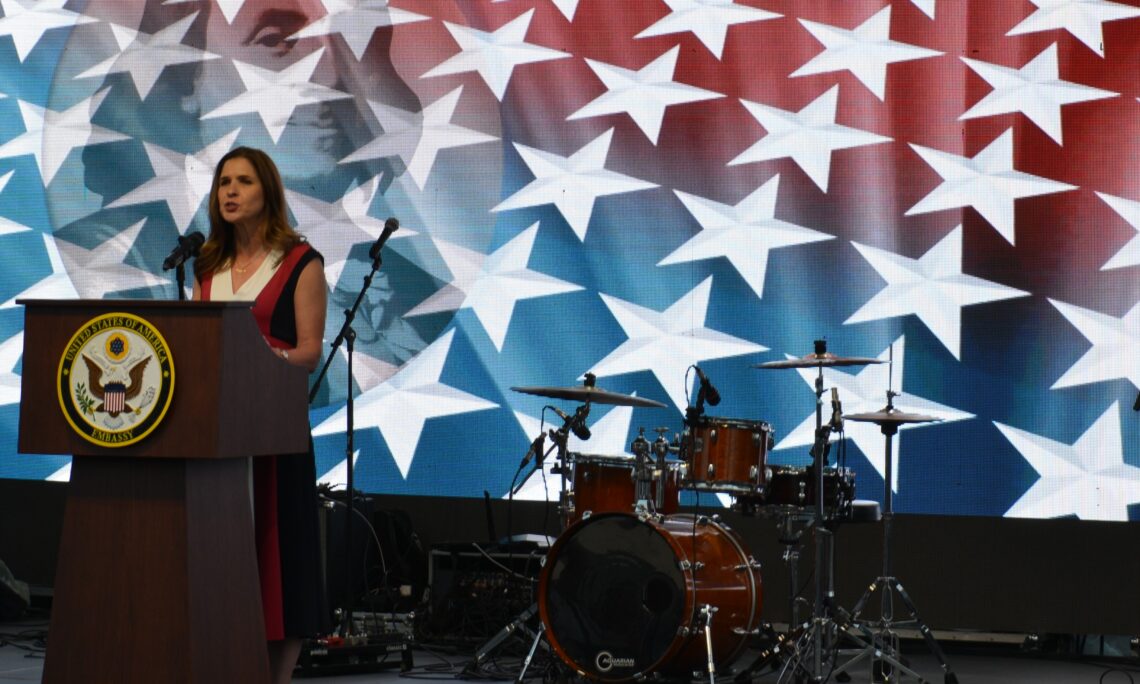 Thank you all for being here tonight to share in the celebration of the 246th anniversary of the independence of the United States of America.

I speak for all my Embassy colleagues when I say that it feels good to be back in person and among friends. And before I get to my remarks, please join me in acknowledging the outstanding work of my Embassy team, led by Jarek Buss and Sehee Chung, to transform this campus and create this space for us to be together this evening.

Almost three years ago to the day, I came up this hill to Embassy Skopje for the first time, inspired by the view and the promise that surrounded me.

I was aware that there would be challenges. Some of them I knew and expected, like the need to continue the fight against corruption, to strengthen rule of law and reinforce democratic institutions. Some of them I didn’t, like a deadly worldwide pandemic, devastating wildfires, and a brutal and unjustified war raging in Europe.

But whatever the challenges that lay ahead, I was confident that the relationship between the United States and North Macedonia was strong enough and dynamic enough that together we could meet them head-on and come out more resolute in our partnership.

I strongly believe that over the past three years we have seen this to be true here in North Macedonia.

Together we’ve seen North Macedonia progress from an aspiring NATO member to a reliable, equal and capable Ally.

This past May, North Macedonia hosted the Swift Response exercise, which was the largest military exercise ever held at the Krivolak Training Area, and showcased the attributes North Macedonia brings to the alliance.

North Macedonia’s army has modernized and improved its readiness and response capabilities, and Russia’s barbaric aggression against Ukraine—people with whom they claim brotherhood and kinship and commonality—could not illustrate more clearly why NATO is more important than ever.

North Macedonia has repeatedly shown its commitment to strategic partnership and upholding democratic principles—the same ideals Russia is attempting to deny the citizens of Ukraine.

Whether standing firm in its support of sanctions against Russia or assisting with Afghan evacuees, or actively participating in President Biden’s Summit for Democracy, North Macedonia has been a trusted, reliable friend.

Together we’ve collaborated to protect the environment, the culture and the economic opportunities that make North Macedonia such a vital part of the region.

Here at the Embassy, a rainwater harvesting program and a switch from heating oil to natural gas in 2019 helped to conserve natural resources and diversify energy sources, reducing reliance on untrusted energy suppliers.

From Strumica to Stobi to right here in Skopje, Ambassadors Fund for Cultural Preservation grants have helped North Macedonia protect and preserve its cultural heritage with $200,000 in funding since 2019 and more than $1.5 million over the last 20 years.

And as North Macedonia’s leadership in the Western Balkans has expanded, so has the opportunity for economic growth and new development. Since 2019, nearly $60 million has been invested in industry, infrastructure and innovation by U.S. interests, creating thousands of jobs.

We saw the importance and growth of our relationship in our interactions at the highest levels, from a visit by the Secretary of State, to the Strategic Dialogue that took place just last month in Washington, D.C.

Because our partnership has strengthened over the past three years, we continue to take on the difficult issues that threaten our society and our democracy. Together we have worked long and hard to protect the population from COVID-19 and other health-related issues, strengthen the justice system in North Macedonia, tackle corruption, and make democratic institutions more resilient.

More than simply looking to address the issues today, we’ve also invested in equipping those who will be providing the answers tomorrow. U.S. exchange programs have empowered a growing list of talented, intelligent young people to shape the future in cutting-edge ways.

Students like Angela Busheska at Lafayette University, who developed an app to calculate carbon intensity of everyday activities and who was named to Forbes Magazine’s 30 under 30 list for social impact in Europe.

From extending the Science and Technology Cooperation Agreement in 2019 to the rule of law summer camp I just visited last week, the youth of North Macedonia are more media literate, more tech savvy and have more access to education and skills development resources than ever before. This should be something to celebrate.

We had other chances to celebrate anniversaries and achievements over the past three years.  A quarter century of diplomatic relations between the United States and North Macedonia. Thirty years of USAID partnership and 25 years of Peace Corps activity in the country. A longstanding cooperation with the Vermont Army National Guard. And of course, 30 years of your independence.

Together we cheered for Tamara Kotevska, Ljubomir Stefanov and Honeyland’s two nominations at the 92nd Academy Awards. There was Dejan Georgievski’s inspiring individual achievement at the Tokyo Olympics. And North Macedonia’s exciting UEFA performances which brought them to the cusp of qualifying for Qatar this year.

Of course, not every milestone is a joyful or triumphant one, but each is an opportunity to further define who we are as a nation.

Today our flag is lowered to honor the victims of the tragedy in Highland Park, Illinois.  Even when we fly it in sadness, we fly our flag with pride in what America stands for and works toward.

Earlier I mentioned climbing the hill up to the Embassy on my first day as Ambassador. As individuals, as communities, as nations, we all have hills to climb.

Democracy is an uphill climb. Our Founding Fathers knew it 246 years ago, just as you know it after 30 years.

We must continue to strive to better the lives of our citizens and the future of our youth; to call out inequities in the system; and to safeguard our most precious values and freedoms.

Indeed, it can be a burden to maintain the right path and to keep looking up, rather than looking for a way out. And sometimes it means making tough choices in the hardest moments, and even making compromises to achieve longer term objectives.  Those choices are part of our democratic journeys.

As North Macedonia—as you—continue to climb the hill toward a more secure, Euro-integrated future, difficult challenges must be confronted. The dilemmas they create are unique to your nation and your journey, but they are not yours to face alone. The United States is with you on that climb. And as new challenges face both our nations, as allies, partners, and friends we will meet them together. Stronger and more resolute than ever.

At his inauguration, President Biden called on the American people to meet this “historic moment of crisis and challenges” with boldness and unity as “the path forward.”

Joining him on Capitol Hill that day was a young poet who spoke her heart and captured ours when she called on us “to lift our gazes not to what stands between us, but what stands before us.”

I’d like to leave you with another quote from Amanda Gorman’s poem, “The Hill We Climb,” because I believe it elegantly captures the relationship between the United States and North Macedonia:

“Let the globe, if nothing else, say this is true.

That even as we grieved, we grew.

That even as we hurt, we hoped.

That even as we tired, we tried.

That we’ll forever be tied together, victorious.”

Thank you all for your partnership and friendship in celebrating our nation’s independence with us tonight. From this beautiful spot in North Macedonia, please enjoy some of the sights, sounds, and tastes that make “America the Beautiful” as well.