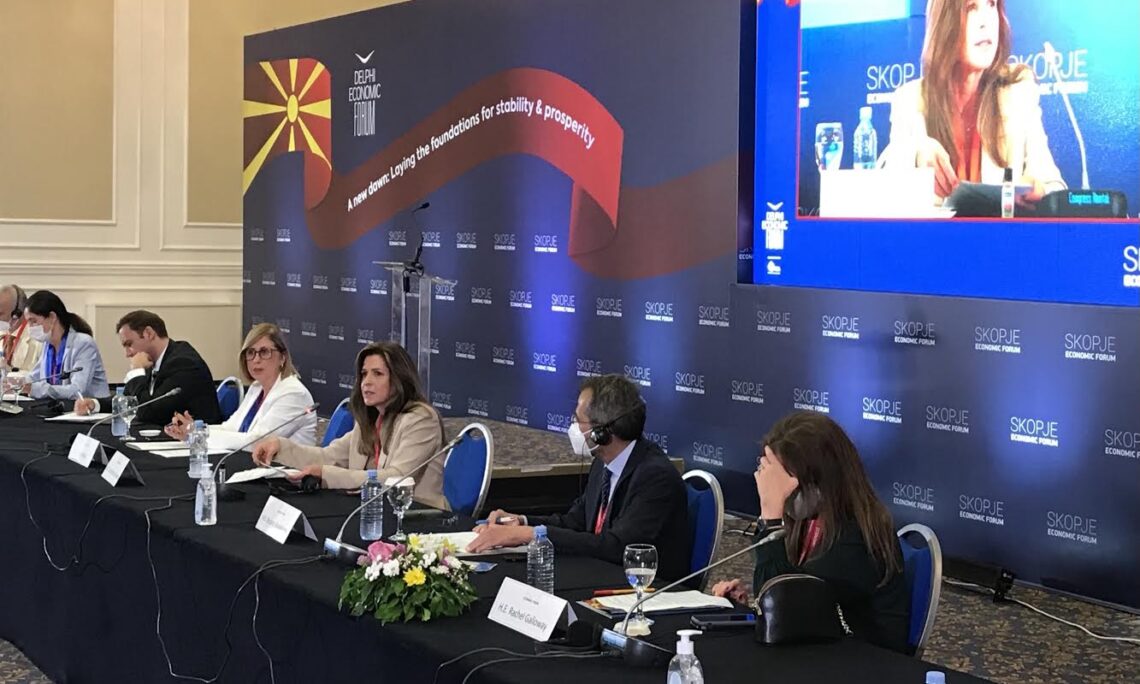 Good morning – it is a pleasure to be here with you today.

Before I make some brief remarks, I want to thank the organizers of today’s event, Delphi Economic Forum and the Hellenic Business Association in North Macedonia for inviting me to participate in the first edition of the Skopje Economic Forum.  I am truly pleased to be here with you and discuss how greater regional stability and integration can accelerate the post-COVID economic recovery and lay the foundation for a more prosperous future in this country and the Balkans region.

The United States’ priorities for the Western Balkans are clear and have not changed.  We continue to see the region’s future at peace and integrated with itself, with its neighbors – stable, prosperous, and fully integrated into the Euro-Atlantic framework.

We remain disappointed EU member states were unable to include approval of North Macedonia’s negotiating framework on the agenda during yesterday’s General Affairs Council meeting.  There is no doubt that North Macedonia has done the work necessary to launch accession talks – a move that would increase regional stability and advance political and economic connectivity with Europe and the Transatlantic partnership more broadly.

In fact, our European partners agree with us that the convergence of Western Balkan economies with those of the EU means a more stable and stronger Europe.

Regional stability is intimately intertwined with economic security.  Regional stability that is broadly shared – both within and with other countries – can foster prosperity and progress.  Stability is a necessary precondition for investment, trade, sustained economic growth, and greater opportunities.

Each of the Western Balkan countries individually represent small markets for serious investors.  Together, they represent a potential consumer market of nearly 18 million people that can attract large American and European companies, which will in turn raise the region’s competitiveness.

North Macedonia has made remarkable progress in recent years.  The country left behind political instability that hindered democratic reforms and has become a partner capable of bolstering security, stability, and prosperity across the entire Balkan region.

Signing the Prespa Agreement, becoming a NATO member, and unlocking the path to the EU are only some of the most notable successes.  Now is the time for investments and trade to reap the benefits of those political wins, and for economic growth to pick up.

North Macedonia’s bilateral trade relationship with the other Western Balkan countries, and with neighboring EU countries Greece and Bulgaria, is critical and will continue to grow.  Regional economic integration is a key part to expanding this growth.  The six countries of the Western Balkans have shown a clear commitment to increase regional interconnectivity by signing the Declaration on the Common Market and the Declaration on the Green Agenda, two important documents within the Berlin Process.

Taking over the presidency of the Central European Free Trade Agreement (CEFTA) in 2021, North Macedonia’s government committed to the shared values and standards of CEFTA and to priorities that would create a region without obstacles to trade.

Construction of a common regional market is a way to increase competitiveness in the Western Balkans before its formal inclusion in the EU market.

North Macedonia and its regional neighbors have also made significant strides in reforming their energy sectors and opening markets.

Investments in energy diversification are smart investments.  Diversified energy sources and clean technologies will not only bring positive economic benefits but will also bolster domestic and regional energy security, all the while contributing to the region’s climate commitments.

As North Macedonia plans to increase its solar, wind, hydro, and biogas capacities, we are confident that transparent tenders and free-market competition will appeal to businesses and attract investments.

This increased production capacity, combined with the government’s plans to upgrade the electricity transmission network, will further connect North Macedonia and the region.

Moreover, we fully support and encourage deeper bilateral and multilateral government and business cooperation.  I was thrilled to see the government of North Macedonia met with several American firms while in Athens for the Delphi Economic Forum in May, leading to a number of potential business opportunities.  Chambers of Commerce and business associations can be the essential connective tissue across borders.

I encourage business leaders to think of the regional market when expanding operations, and to reach out to counterparts, including fellow business chambers and associations, across borders.

The United States would also like to see North Macedonia and the region develop stronger transportation links.  The Berlin Process is an excellent means of prioritizing and advancing these projects.  Continued progress on Corridors 8 and 10 will facilitate trade and transportation within the Balkans and between the Balkans and EU member states.  Similarly, I encourage governments and businesses to apply the same principles and standards to the services market, and to build a single market in services.

One way the United States is helping these efforts is through USAID programming that enhances trade and transport facilitation and cross-border cooperation in the Western Balkans.

Earlier this month, the prime ministers of North Macedonia and Albania signed the Bilateral Framework Agreement on Joint Border Crossing Points, and I look forward to participating next month in the handover of border control equipment to the Customs Administration at the Kjafasan border crossing between the two countries.  We expect these efforts to significantly reduce the time for movement of goods across the border and will serve as a model for establishing more jointly operated border crossings in the region.

Reducing friction in labor markets is also key.  Harmonization is equally, if not more, important in the labor markets, which are currently regulated country by country.  Efforts to remove barriers in this space would serve to help people live and work where their skills are most needed.

At the end of the day, North Macedonia belongs within the EU.  While this is a long path, it is important to continue making progress.

Fundamentally, the steps in this process are of enormous benefit to the people of this country.  Steps like strengthening the rule of law and meaningfully fighting corruption, improving infrastructure, integrating your economy with that of your neighbors, creating a fair and level playing field for investment and business—these things are indeed EU benchmarks, but more importantly, they benefit North Macedonia and its people, especially its youth.

If political leaders steal from their country’s citizens or flout the rule of law and an independent judiciary, then economic growth slows, inequality widens, equitable access to services is undercut, markets are distorted, and trust in government plummets.  In effect, democracy is weakened, not the economy.

As President Biden recently said, “We have to build the shared future we seek.”   Continuing to build out connections between North Macedonia and its neighbors will build that shared future.  It will allow both this country and the region to benefit from each other’s networks, increasing security of supplies and bringing significant investment opportunities for U.S. and other regional businesses.

Now is the time to keep moving forward, to continue implementing structural reforms designed to revive the post-COVID economy and strengthen democratic institutions, to make them more independent, more transparent, and more accountable.

The United States will be with North Macedonia and the region every step of that journey forward.  Yes, there may be many challenges and risks along the way, but I am confident in the region’s future.