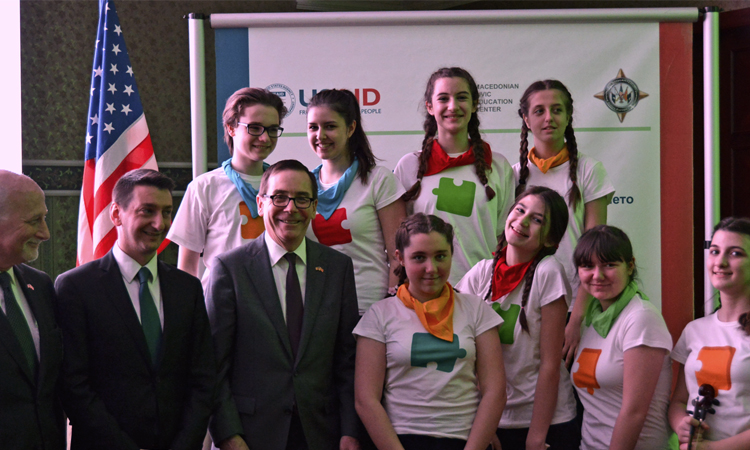 Ambassador Jess Baily at the Close-Out of the USAID Interethnic Integration in Education Project. (EMB photo)

This is a really fantastic event.  I think anybody looking around this room and seeing all these students, teachers, parents, mayors would agree.  I am grateful for the Minister to be here today; you can see what an important project this has been for Macedonia over the last five years; but also, it is a good sign for Macedonia’s future.  USAID and the United States has been proud to sponsor this project that has helped students and teachers work on issues of inter-ethnic integration through education, through both school and after school activities, and it has taught people how to work together in respect and understanding.  It is also something where people have had, just frankly, a lot of fun, and you see that kind of energy in this room here today.

This has been a big partnership.  I mentioned the municipalities we have worked with, the Ministry of Education, and the implementing partners.  But it has also been a partnership in my own government between USAID and U.S. European Command, which, along with the Ministry and municipalities, have renovated 63 schools around this country as part of this program.  That has benefited more than 40,000 students and 5,000 teachers to improve educational conditions, not only for activities involved in inter-ethnic understanding, but also in the rest of the schools.  We are very proud of that.

Around the room you also see a lot of other people, parents, people who volunteered their time, efforts, energy, and in some places money to help these students along. It is a tremendous testament to people engaging in their communities, engaging in making their communities better, and it is this whole partnership between government, civil society, teachers, students, parents, mayors that have made this such a good and important project, and one that is sustainable in the future.

This kind of activity is the future that people want; it shows the mosaic of this beautiful country Macedonia.

So, thank you all!  It has been a great pleasure for me to be here.  I have had an enormous pleasure in going around the country and seeing some of these activities, and most of all meeting the students and young people.  Nothing gives me more hope and energy than doing that.

Question 1:  Ambassador, as a friend of Macedonia, how do you suggest that the crisis should be resolved; is Przino 3 an option?

Ambassador Baily:  I think we have spoken to this many times.  I don’t know if there is 1, 2 3… Look, there is a system since May and on into July 2015, which was to bring the crisis to an end by returning to Parliament, by establishing the conditions for good and fair elections, for dealing with the issue of the unauthorized intercept of conversations, both about how that came about and what they reveal, and getting on with the reform priorities – that remains the basis for how you go forward.  So, if you look at all those elements, I think you see how you can bring the crisis together.  We remain Macedonia’s friend and partner.  We want to help this process along.  But, at the end of the day, it is you citizens, your leaders making democratic institutions work.  There is tension in society, there is division, and it is by using those [democratic] institutions that you bring people together.

I think if you look around this room here today, you see where solutions lie.  Thank you very much.

Ambassador Baily:  We have made our comments several times regarding President Ivanov’s decision.  We don’t think it was the right decision.  We hope he will reconsider that.  I think it is important, as I said, for the democratic institutions to function, and I think that is where the solutions lie.