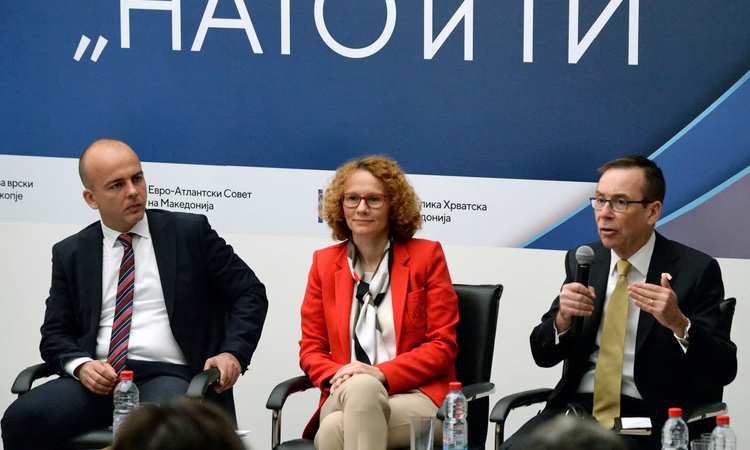 (as prepared)
Ambassador Jess L. Baily, (April 4, 2018): It is a pleasure to be here again to mark NATO Day with so many friends and colleagues.  This is actually my fourth time on this panel.  As I was thinking about this year’s event, what stands out is how different the discussion around NATO is this year from previous years.

We refer so often to Macedonia’s path to NATO that we can lose sight of what that actually means.  Now, because of actions you have taken, Macedonia joining the Alliance feels more achievable, and so it’s worth discussing what such membership actually means.

For me, this conversation centers around the concept of “allies” – not just what you can expect from your allies, but how do you –Macedonia –contribute to the Alliance.

NATO embodies the unique bond that unites Europe and North America.  Our security is indivisible.  When a country joins the Alliance, it gains allies.  We stand together to preserve peace, and we pledge to defend one another.  An attack against any Ally, from any direction, will be met by the Alliance as a whole.

This is a solemn promise, not to be taken lightly, a sovereign choice freely made by sovereign nations. It depends on trust and operates on consensus.  It has worked for nearly 70 years, through many dark days.  It can overcome bilateral differences among allies, and political divisions inside parliaments. Twenty-nine allies speaking in concert sends a powerful message. The American people certainly felt that on September 12, 2001.

At its core, NATO is an alliance built to protect the very values that lie at the heart of our shared Euro-Atlantic heritage and civilization – democracy, individual liberty, and the rule of law.  Countries that join the Alliance make the decision to fully embrace these values.  Indeed, we know that the vast majority of Macedonia’s citizens support NATO and share these values.

Why do values matter in a security alliance?  Because we have seen all too often that weak democratic principles, weak rule of law make countries vulnerable – to corruption, to abuse, and to malign influences – both internal and external.  Those vulnerabilities make for weak allies.

Macedonia has recognized that these values are important – for you as a citizens of an independent republic and for you as a member of the Euro-Atlantic community of nations.  The government has started the hard work of reforms to improve democracy, the rule of law, and human rights.  Such changes do not occur overnight; they will require focus and persistence – and unity of purpose.   The United States supports these efforts.

Allies also need to be strong security partners.  President Trump has injected new urgency in the long-standing U.S. position, namely that NATO’s success depends on equal commitment from all members.  The United States expects all our allies, and all who would wish to join our alliance, to meet our mutually agreed commitment of spending at least two percent of their GDP on their own national defense.  Continued investment in our collective capabilities allows the Alliance to meet new challenges, whether from terrorism, large-scale migration, cyberattacks, and Russia’s reckless actions, including attempts to undermine Western institutions like NATO.

Macedonia has made a good start in this regard.  The Ministry of Defense and the General Staff have begun the Strategic Defense Review process, which will ensure that future investments are done in a smart way that will allow the armed forces to be more effective.  You have also committed to increasing your defense budget.  We will continue to support this modernization process, along with other international partners, through our assistance and military cooperation.

Macedonia is already active in NATO operations, training, and other exercises.  These activities have formed personal bonds between our soldiers that bind our countries together and ensure that our armies can communicate and operate jointly.

The United States stands by the 2008 Bucharest Summit declaration and the decision of the Allies that NATO will invite Macedonia to become a member of the Alliance as soon as a mutually acceptable solution to the name issue has been reached.

Standing together with Allies, upholding our values, investing in our collective defense.  That’s what NATO is about.  That’s why the United States looks forward one day to welcoming Macedonia as a full member of the Alliance.