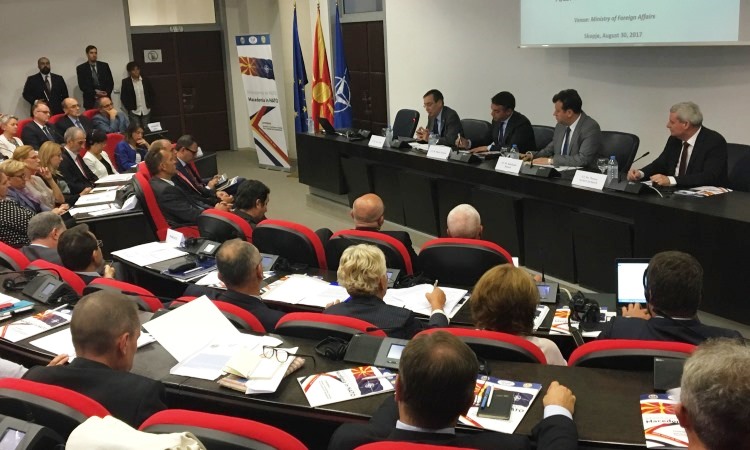 Good morning, Ambassador Memedi, Minister Dimitrov, Ambassador Gerberich, and distinguished guests.  It is a pleasure for me to join the Ministry of Foreign Affairs and the Marshall Center Alumni Association once more to discuss long-term efforts to see Macedonia join NATO and other Euro-Atlantic institutions.  It is good to see so many friends, partners, and supporters of this goal here in the audience.

Obviously, there have been significant political changes in Macedonia, the region and the United States since last August, when I spoke at the Marshall Center Alumni conference about the Warsaw Summit.  Three things have not changed.  First, NATO remains the core of transatlantic security, important as ever, and resilient as ever as it meets new challenges, including terrorism, cyber and hybrid warfare, and asymmetric conflicts around its periphery.  Second, Allies and partners remain committed to NATO and indeed are increasing their investments in collective defense and deterrence.

The third thing that has not changed is Macedonia’s strategic goal of joining NATO, and the U.S. commitment to work with Macedonia to achieve this. That’s what I would like to spend a few minutes discussing with you today.

In Podgorica at the beginning of the month, Vice President Pence both reaffirmed U.S. support to NATO’s Open Door Policy and challenged regional leaders to take advantage of the current opportunities. At the Adriatic Charter summit, he urged leaders to “settle grievances of the past and bring people together in pursuit of the common good,” to “tackle corruption and build accountable and transparent governments,” and, ultimately, to “unlock the vast potential of your countries and realize our shared dream of a Europe whole, free, and at peace.”

Here in Macedonia, we applaud the new energy and creativity towards improving relations with your neighbors.  At the same time, we recognize the many challenges that remain and the many reforms that still need to be addressed.  I assure you today that the United States remains your partner in these efforts.  The process involves three areas where you can act, and we – your friends – can help.

First, Macedonia must continue to address urgent democratic reforms here at home.  NATO is more than the sum of our combined military capabilities.  NATO is a family joined by shared values and a desire to protect our values as much as our territory and our people.  In its very first paragraph, the North Atlantic Charter underscores the principles of democracy, individual liberty, and the rule of law.   We have learned, for example, that weak institutions and the absence of the rule of law create vulnerabilities, eroding a country’s security, stability, and prosperity.  Macedonia, like all new aspirants, must meet NATO’s high standards for membership in this regard.  The new government has laid out an ambitious plan of reforms.  Now is the time to turn plans into action.

Here the United States is and will be your partner, along with the EU and other friends.  We are committed to working with Macedonia’s leaders and citizens to facilitate real change, to see a system where laws are enforced equally and fairly, where citizens have access to information and media report on and debate issues freely, where leaders are accountable, and where strong institutions serve the public, not political parties. Such reforms will never be easy or quick, but they are achievable, step-by-step.

Second, Macedonia must continue to invest in the modernization of your armed forces.  President Trump has made it clear that NATO’s success requires equal commitment from members.  This is not a new position.  The United States expects all our allies, and all who would wish to join our alliance, to meet the minimum commitment of spending at least two percent of their gross domestic product on their own national defense.  NATO will only remain strong if all nations show their respect for its benefits and carry a full and equal burden of our shared defense.  The good news is Allies are responding with new commitments and new energy.

And so is Macedonia.  Its participation in NATO operations, training, and other exercises shows its commitment to our common goals.  I was honored to meet the 70 Macedonian soldiers who participated in this summer’s Saber Guardian exercise, as well as to welcome the U.S. Army’s 2nd Calvary Regiment to Macedonia a month ago.  The personal bonds soldiers form during these joint exercises bind our countries together and ensure that our armies can communicate and operate jointly.  Macedonia’s soldiers are skilled, dedicated, and smart; working with them strengthens the Alliance and makes us all stronger.  And, the new government has made clear that it will increase spending and investment in its armed forces, making sure they have the resources, equipment and training they need to be fully effective.

Finally, Macedonia must continue to pursue stronger relations with its neighbors.  Here we have seen important progress.  The Friendship Treaty with Bulgaria increases trust and charts a way forward to further cooperation in diverse areas like infrastructure, trade, and culture.  Your friends have welcomed it as an encouraging example of how differences between neighbors can be resolved peacefully.

Important conversations are ongoing with Greece, including yesterday’s discussions on confidence building measures in Athens and tomorrow’s visit to Skopje by Foreign Minister Kotzias.  NATO allies have consistently reaffirmed their commitment to extend an invitation to Macedonia once Macedonia and Greece find a mutually acceptable solution to the name issue.  No one is under the illusion this issue will be solved overnight.  As Vice President Pence reminded us, however, now is a “historic moment for progress” in the region. We urge you to make the most of this moment.  The United States along with your many friends are ready to assist your and Greece’s efforts.  Success will only enhance regional stability.

To conclude, NATO has safeguarded the freedom and security of its members, promoted democratic values, and helped ensure regional stability for the benefit of both member nations and non-members alike.  Macedonia is already a contributor to regional and global security.  We know your path to NATO has been frustrating but you have persevered, bolstered by strong support from all political parties and across ethnic communities.  We look forward to our continued partnership, to supporting you in the tough work ahead, and to one day welcoming you as a full member of the Alliance.

I wish you a successful conference.  Thank you.