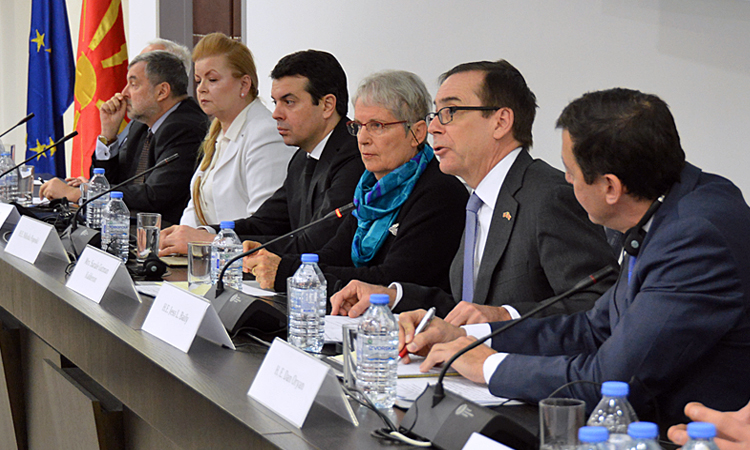 It is an honor to be with all of you this morning.

Thank you to the Ministry of Foreign Affairs for organizing this ceremony, and to Mrs. Gutman for traveling from Israel to be here in Skopje.

Today is about remembering, learning, and staying vigilant.

Whether our own families have personal connections to these horrors or not, none of us should ever forget that behind each of the victims was not a number, but a name and the story of a life cut short.

Macedonia lost a thriving, integrated, and historic part of its culture and history when 98% of its Jewish population was murdered during World War II.  Over 7,000 Jews, some whose ancestors had lived in this area since Roman times, were rounded up into ghettos, transported in crude rail cars, and beaten, starved, tortured, and murdered at the Treblinka Concentration Camp in Poland.

On this day, we honor the memory of those whose futures were never realized.  We owe it to each of them to keep their stories alive so the world will never again tolerate such evil.

On this day, we also honor those, like Mrs. Gita Shammy, who survived the Holocaust, as well as individuals who risked their lives to save Jews and other victims from persecution.

Mrs. Gutman, I read your mother’s story over the past weekend –lazy picnics outside Bitola that ended when she fled to Greece one day before her family and others were sent to Treblinka; then her own horrible deportation from Thessaloniki to Auschwitz and Bergen-Belsen; her will to live amidst unimaginable horror, and the death of so many; her return to Bitola to marry your father, and move on to help build Israel.  Her humanity and kindness leap from the pages.

Her story helps us understand the enormity of suffering; her sharing it helps make the world a better place.

We have an obligation to listen to Holocaust survivors, to preserve their stories, and to make sure a generation never arises that does not know what happened in the concentration camps.

The United States – its government, private institutions, and citizens — is a committed partner in this effort.  It includes the United State Holocaust Memorial, whose “First Person” program allows survivors to tell their stories to more than 56,000 people annually.

It includes the Simon Wiesenthal Center, whose Museum of Tolerance helps visitors understand the Holocaust in historic and contemporary contexts, and challenges visitors to confront bigotry and racism.  And it includes support to education programs and institutions like Macedonia’s Holocaust Museum, just steps from this ministry.

Accounts like Mrs. Shammy’s remind us that every day – as nations, as communities, and as individual human beings – we have countless chances to stand up for the people around us.  No person should be subject to violence or oppression based on who they are or what they believe.

For us, then, remembrance is the beginning, not the end of our responsibility.  The duty we have is an active one:

to confront and defend against those who attack others on the basis of race or religion;

to unite against all forms of bigotry and sectarian hate; and

to reaffirm our commitment to the fundamental rights and dignity of every human being.

Tom Lantos, a Holocaust survivor and distinguished Member of Congress for nearly three decades, used to say, “The veneer of civilization is paper thin.  We are its guardians.  We can never rest.”