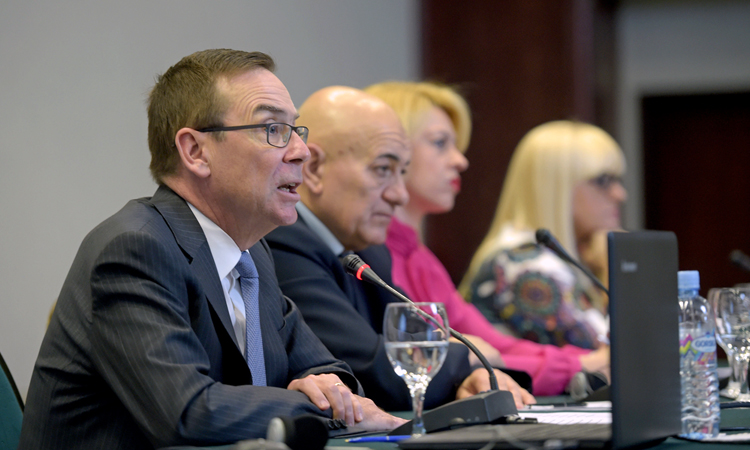 Ambassador Baily attended the conference hosted by the Macedonian Bar Association discussing the “Role of Lawyers in the Protection and Promotion of Human Rights.”

Madam Minister of Justice, Mr. President of the Macedonia Bar Association, distinguished judges, and members of the bar, thank you for inviting me to join you.

Today we celebrate the 70th Anniversary of the Universal Declaration of Human Rights, drafted in response to the horrors perpetrated during the Second World War and the period leading up to it.

The declaration was an aspirational document – not a binding commitment – an effort to define the basic rights that every human deserves.  It drew from the constitutions of many free nations, including the United States, when it declared that “All human beings are born free and equal in dignity and rights” and “Everyone has the right to life, liberty and security of person.”

But universal declarations – and even the binding laws and constitutional provisions which arise from them – are meaningless without action.  Without the hard work needed to enforce and uphold the human rights declaration, the lofty words will simply drift away.

That is, of course, where you come in.  As lawyers, you play a vital role in ensuring the rights enshrined in this declaration are more than just ink and paper.  As advocates for those facing criminal charges and the deprivation of liberty, or seeking redress for a harm, it is your unique task to ensure that the justice system respects the rights declared and defined in these documents.  Each one of you are the voice of human rights, every time you walk into court.

A universal declaration of human rights was necessary because over time, people with unchecked power, whether they be politicians, government officials, judges, or prosecutors, tend to abuse it.  Individual rights, such as the right to a presumption of innocence, the right to a full and fair public hearing, the right to thought and expression, among others, are trampled.  You, the women and men in this room are critical checks on the abuse of power.

Lawyers do not act as a check on government abuses by standing at barricades and shouting through megaphones.  You do so in a targeted and incremental way.  In individual cases, both in court and on the courthouse steps, you insist, you implore, you demand, that the people who stand charged of crimes are accorded the universal rights written in your laws.  If you are to be successful, you must give life to the words in this declaration through your advocacy before the courts. Your words must be measured but pointed, your arguments respectful but forceful.

John Adams, one of my country’s Founding Fathers, believed deeply in the right of the accused to counsel and a fair trial.  In 1770, as a lawyer in Boston, he defended nine British soldiers accused of shooting and killing civilians who were part of a crowd throwing snowballs and sticks at the troops – an event known as “the Boston Massacre.”   Assuming this role did not make Adams popular in pre-revolutionary Boston, and several lawyers passed up the opportunity.  At trial, Adams’ brilliant defense led to seven soldiers being acquitted of murder and two convicted of manslaughter.  Years later, after he helped found our republic and served as its second President, Adams remembered his defense “as one of the most gallant, generous, manly, and disinterested actions of my whole life.”  He added that a death sentence would have been “a stain on our country.”

At that same trial, Adams famously observed: “Facts are stubborn things; and whatever may be our wishes, our inclinations, or the dictates of our passion, they cannot alter the state of facts and evidence.”

Your job is not done if you simply win for your client.  You must make sure that the outcome is based on the evidence presented in court and the laws applicable to that case – and not a product of some deal made in a cafe.  You must insist that not only the outcome of a case is just, but that the process is transparent and fair.  To do otherwise would undermine and weaken the justice system for everyone.

Let me speak for a moment about Article 10 of the declaration, the right to a full and fair public hearing.  Much has been said about the need for greater judicial transparency in Macedonia.  Transparency not only protects the rights of the defendant, but it also encourages public trust in the judicial system.  U.S. Supreme Court Justice Oliver Wendell Holmes, wrote: “It is desirable that judicial proceedings should take place under the public eye because it is of the highest moment that those who administer justice should always act under the sense of public responsibility, and that every citizen should be able to satisfy himself with his own eyes as to the mode in which a public duty is performed.”  Transparency and public proceedings enhance the basic fairness of the process as well as the appearance of fairness, which is essential to building and maintaining public confidence in the system.

Critical to your advocacy is an unwavering insistence that all important judicial proceedings take place in open court, on the record, accessible to all.  For many years, prosecutors and judges here claimed that courtrooms must be closed or partially closed for security reasons.  Now, closing the courtroom is often justified by privacy reasons.

But, in the face of the deprivation of an individual’s liberty these factors – security and privacy – must not give way.  If someone is to be tried and incarcerated for a serious crime, the defendant and the public need to be confident that the evidence presented establishes guilt beyond a reasonable doubt.  It is your formidable task to insist that all essential portions of a criminal proceeding be conducted in the open.  Interestingly enough, we know so much about Adam’s defense in the Boston Massacre trials because the court had a dedicated reporter transcribing the proceedings, a rarity at the time.

In closing, let me turn to Eleanor Roosevelt, who chaired the committee that drafted the Declaration of Human Rights.  She asked: “Where, after all, do universal human rights begin?”  To that, she answered: “In small places, close to home – so close and so small that they cannot be seen on any maps of the world. Yet they are the world of the individual person; the neighborhood he lives in; the school or college he attends; the factory, farm or office where he works. Such are the places where every man, woman and child seeks equal justice, equal opportunity, equal dignity without discrimination. Unless these rights have meaning there, they have little meaning anywhere.”

It is particularly fitting that we celebrate this declaration with you here today.  Because each of you practice law in “those small places, close to home,” of which Eleanor Roosevelt spoke.  Every day in every courtroom across this country, you take lofty ideals in ink and on paper and transform them into action.

Thank you for your service as defenders of human rights.  We welcome the Bar’s cooperation with the Embassy on this and other joint efforts to strengthen the rule of law in Macedonia.  And thank you for your attention today.