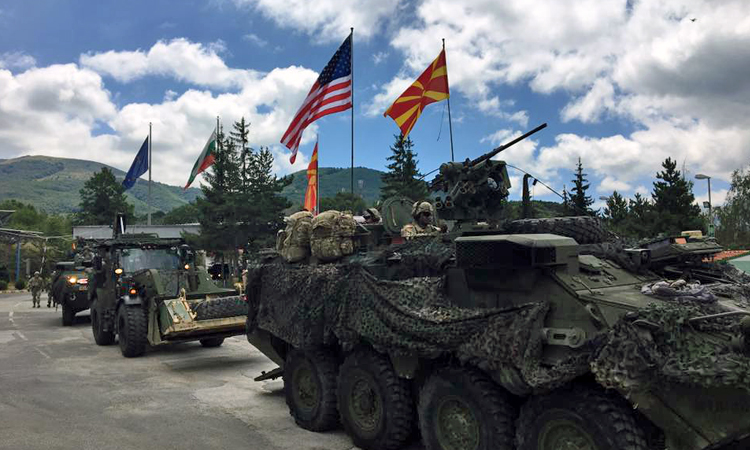 Thank you, Mayor Damjanovski   It is great to be here today in Kumanovo with you, Minister of Defense Shekerinska, and General Mileski to welcome Lt. Colonel Himes and the Engineer Squadron from U.S. Army Europe’s 2nd Calvary Regiment and launch  the Dragoon Guardian exercise.

Over the next ten days,  soldiers from our two countries will work together to improve their readiness.  They will complete several complex engineering and medical tasks that will ensure their ability to meet any challenge that may arise.

It is fitting that we start this exercise here in Kumanovo – a city that has  served throughout history as a crossroads between Macedonia and its neighbors, connecting  trade and transportation routes between east and west with north and south.  Exercises like Dragoon Guardian serve a similar role;  they connect  soldiers, countries, and regions in pursuit of our shared goals.

First, joint exercises like this one connect our soldiers.  As they work together, our soldiers form personal bonds with each other.  These bonds bind our two countries together, but they also ensure that our two armies can communicate and operate jointly.

We are proud that this year nearly 600 soldiers from Macedonia will participate in U.S.-sponsored, multinational exercises across Europe.  As our troops experienced this past month during the Saber Guardian exercise, Macedonia’s soldiers are skilled, dedicated, and smart; working with them  make us all stronger.

While we build connections through exercises, we test them on the battlefield.  Soldiers from Macedonia have fought side-by-side with Americans in Afghanistan and Iraq since 2002.  I know that the U.S. Army has great respect for their counterparts from Macedonia.  We saw their bravery and dedicationin 2011, when they joined with U.S. forces to defend the U.S. Embassy in Kabul,  Joint exercises also bring our two countries closer together.    .

Throughout the next week, U.S. and Macedonian soldiers will travel to different communities in Macedonia to demonstrate how they work together to ensure our mutual security.  I hope that citizens throughout the country will take advantage of this opportunity to greet the soldiers and learn more about their efforts. I can think of no better representatives of the United States than these Dragoons.   They will also be bringing cool vehicles like the ones you see today!

Finally, joint exercises bring Macedonia closer to NATO.  It is important to note that NATO membership is not something that we only talk about.  Through bilateral training exercises and NATO-supported events and operations, we help Macedonia prepare for full NATO membership.

In this respect, it is fitting that we welcome today the 2nd Calvary Regiment, a historic regiment that has fought in almost every major U.S. military engagement since the early part of the 19th century.  Their motto is “Toujours pret” – always ready.  After the United States entered WWI, the Dragoons accompanied General Pershing, making them the first soldiers to land in France 100 years ago last month.   The regiment  is now part of the European Reassurance Initiative, which works to transform U.S. Army Europe to a lighter, more agile force that cooperates closely with NATO allies and partners.  .

Next week, Vice President Pence will travel to Montenegro to meet leaders at the Adriatic Charter Summit.  Last month in Washington, he said, “NATO’s Open Door must always remain so for those nations that share our values, wish to contribute to the most successful alliance in history, and seek a brighter future of security and prosperity for our nations and the world.”  The United States works to see Macedonia join NATO, whether through supporting  reforms to strengthen your democracy or through exercises like Dragoon Guardian.

Thank you to all who helped to organize the Dragoon Guardian exercise, and Colonel Himes, I look forward to visiting you next week in Krivolak.