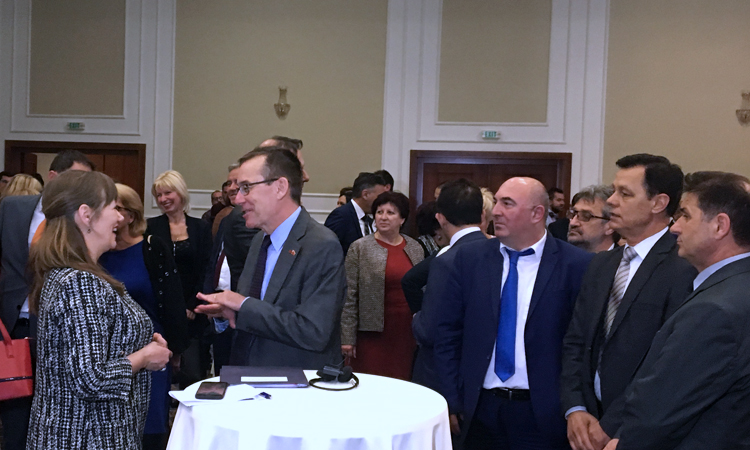 Ambassador Bailey accompanied by the OSCE Ambassador Suomalainen participated at the closing of the “Day of Judiciary” conference hosted by the Macedonian Judges Association.

Thank you for inviting me to participate in this event today.  One of my first events in Macedonia concerned the rule of law, and it has remained a focus of my time here.  Few things are more important in Macedonia than supporting a more transparent, accountable system that respects the independence of the judiciary.

This is not just my view.  The government of the United States believes that an independent judiciary is the cornerstone of a modern democracy.  It’s a critical part of the EU acquis. And it’s up to you to make it happen.

As judicial leaders, you know that the citizens of Macedonia also have high expectations in this area.  They want to see a strong judiciary that will serve its citizens efficiently, will dispense justice fairly, will provide legal certainty for people and businesses, and will hold the offenders accountable.

How can you achieve that? Yes, there are reforms, but also by supporting resolute judges who stand up to outside pressure and dispense justice regardless of whether the case involves a high official or small businessman – judges who treat everyone equally before the law and avoid politics.  Change will come with a personal contribution from each of you – with conduct based on integrity and accountability.

There will be roadblocks on the way – even in United States there are people who obstruct and intimidate, but judges must be transparent so people can recognize the competence and trustworthiness of their work.

In July 1902, one of our greatest presidents, President Theodore Roosevelt, made his first appointment to the Supreme Court – Oliver Wendell Holmes – confident he had found a judge opposed to “big railroad men and other . . . large corporations.”  Twenty months and many White House dinners later, in the midst of a presidential election, Holmes voted against the President’s policies related to the biggest railroad monopoly case of the time.  Roosevelt, enraged, declared he “could carve out of a banana a judge with more backbone that that.”

And since I told an anecdote about Republican president, now another one with a Democrat president also named Roosevelt. In 1937, amidst of new deal of social economic reforms, President Franklin Roosevelt was frustrated with the Supreme Court. He thought they were too old and conservative. So he introduced a bill to Congress to allow him appoint more Supreme Court justices and turn the balance in the Court more in his favor. Congress resisted, and I think that was a good choice no matter what you think of the merits of the policies. So, it would be abnormal for politicians at some point not to be frustrated with the judiciary.

But the truth – and time – showed that Holmes, one of the United States’ greatest jurists, exemplified backbone and integrity, ruling against the wishes of the President and the party that appointed him.

I understand that in last two days you have exchanged ideas on best practices and the challenges you face in your important work.  I commend the Judges Association for initiating such an important discussion and the OSCE for making this gathering possible.

In last few years, the U.S. Embassy has partnered with the Judges Association on similar events, where judges began to talk more openly about problems they face in a captured judiciary.

We recognize that healthy dialogue about these problems has reinvigorated the judiciary and improved the overall atmosphere within the country.

I commend the Judges Association for supporting and helping judges implement reforms that can lead to greater transparency, vocal and braver judges, and regular appointments and promotions based on a healthy, merit-based competition.

The presence of the leader of the government here today shows that you have their full respect, that they see the judiciary as an equal branch of a democratic government.

I urge you to capitalize on this new leadership, this respect, and atmosphere and to continue the positive efforts to reinvigorate the rule of law and the independence of the judiciary.  It is critical for you and your profession.  It is critical for the future of Macedonia.