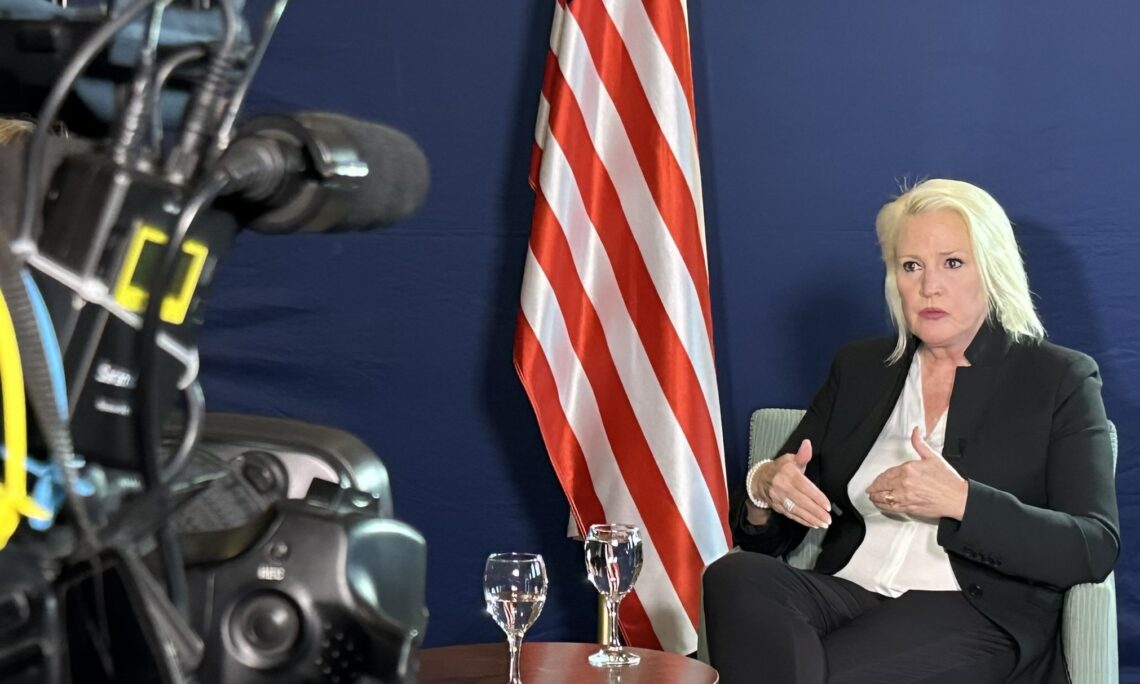 Telma TV:  Your Excellency, you recently had meetings with political leaders.  What is your impression of their engagement regarding North Macedonia’s entry in the EU?

Ambassador Aggeler:  First of all, thank you for taking the time today.  I’m really delighted to talk with you, Snezana.

As a diplomat, as the American Ambassador, it’s my job to talk to political leaders from every party and across the political spectrum.  I find it very useful because I get to hear from them directly about their thoughts, the thoughts of their members of parliament, of their constituents, their voters and how they are viewing the current situation in this country.  So, it’s a very normal thing for the U.S. Ambassador to talk to people across the political spectrum.

I found it particularly interesting in the last several weeks because there’s a lot of discussion in the country right now about Euro-Atlantic integration, European integration, and the move towards the European Union.  I think that’s critically important.

What is also helpful for me is to be able to share my views and Washington’s views very frankly with the leaders, again, of all political parties so they know very clearly where the United States stands, and where the U.S. stands and this embassy stands is in strong support for movement towards the European Union.  Does that call for some difficult decisions and some tough choices once again on the part of the leaders and the people of this country?  Yes, it does.  But I believe that this country is up for the task and so it’s important, also for me, not only to be able to listen but also to share with them, very frankly and candidly, how we view the best move forward for this country for its people.

Telma TV:  The political atmosphere between North Macedonia and Bulgaria is tense.  It seems evident that Bulgaria will not stop pressure, but this is my personal assessment.  In such an environment, is it realistic to expect a consensus in Parliament on constitutional changes?

Ambassador Aggeler:  I think that’s a very important point and again, the people of this country, your viewers, are able to see every day those conflicts and the escalation in some of the dialogue that we see between those in Sofia and those here.

But should it stop or even delay the move forward on the question of moving towards the European Union?  I don’t believe it should.  And I applaud the Foreign Minister for going to Sofia, for example, and having the conversations with the Foreign Ministry there and other leaders, about how to support minority communities here in North Macedonia and how to move forward, the two countries moving forward in resolving any points of pressure between both governments so that the people of this country can move forward with their European aspirations.

Telma TV:  The public in North Macedonia has been expecting a blacklist that would include corrupt officials, or individuals involved in corruption, but this has not happened so far.  Can we expect a blacklist soon, and who would be on that list?

Ambassador Aggeler:  First of all, let me tell you there’s not just one list.  It isn’t as though the United States will come out with a list and say this is it, these are all the names.  This is a constant, ongoing conversation between the U.S. Embassy here and Washington, DC.  It’s across the government in Washington.

There are a number of different types of sanctions lists.  So again, there’s not just one and it’s not just one list and then we’re done, because there’s a continuous review of those that we believe have run afoul of the expectations the United States has in order to continue to, whether it’s allow those people into the United States or face other kinds of financial sanctions.

I don’t have a timeline because Washington will provide those when it has completed the investigations and the determinations.  We do talk with them closely on the development of cases.  And it’s my expectation that within the coming months we will see a few names, but I don’t know what the exact timeline is.

Again, to be very clear, that conversation is one that we have, that I have, that my team here has with Washington.  We’re not soliciting the input of people from this country in terms of — and believe me, people have shared with this embassy since I arrived here many, many names of people that they believe have run afoul and that should be on some type of sanctions list, and we certainly take a look at those.  So, I would ask people to be patient but to understand that this is an ongoing process.

I’m asked about the list.  And again, there’s not just one.  But it’s an opportunity for people maybe to be a little less focused on one list and more focused on the types of activities and actions that would put somebody on a list.  I think this is an opportunity for the judiciary to take a cold, hard look at itself — whether you’re a judge or a prosecutor, whatever your role — and to say am I behaving, am I doing my job with integrity?  Am I being influenced by others?  Am I making these decisions based on law?  And I think we can all point to recent examples where it does not appear to us or to the public that that has taken place.

So there continue to be instances that look very suspicious.  Again, not only to the United States and the embassy but to everyday people who want to be able to move forward with their lives with the knowledge that their government, their officials are behaving in their best interests and the best interest of the citizens and not in their personal best interest of the judge or prosecutor or whomever.

Telma TV: With regard to relations between Serbia and Kosovo, is an escalation of the situation in the region possible?  Today President Pendarovski summoned a session of the National Security Council.

Ambassador Aggeler:  It is a very important question for the region.  As you know, we are concerned, the Counselor of the State Department was here, Derek Chollet, recently. After meetings here in Skopje, he went on to Prishtina.  Our Deputy Assistant Secretary Escobar has been very, very engaged.  We call on leaders of both of those countries to have a dialogue that can calm the situation there because it is quite fraught and quite concerning.

I also believe that the leaders of this country can play a productive role.  Because as we have seen in a number of situations, North Macedonia is arguably the only country in the Western Balkans that doesn’t have conflicts with neighbors.  So, I think they can play a role in bringing leaders together who wouldn’t normally have conversations on a variety of topics.  I think the inter-ethnic question in particular is one in which the leadership of this country can play a productive role.  Because for all the tensions that continue to exist here, they still have made progress.  There’s still been enormous progress here and again, they don’t have existing conflicts so they are able to bring people together to have a conversation about how do we resolve these differences– some with histories that go back decades or centuries– and how do we create a more peaceful region so that people can get on with their lives, so that economies can grow, so that trade can resume, so that there’s normal interaction between their neighbors as well.

Telma TV:  DUI leader Ahmeti labeled TV Telma as, I quote, an enemy of the Albanians.  PM Kovachevski, instead of condemning the attack, offered his opinion criticizing the editorial policy of Telma.  What is your position regarding attacks on media independence and labelling of media?

Ambassador Aggeler:  I believe strongly, and I’ve expressed this, that media freedom is critical in any country.  It is one of our key priorities.  And I feel strongly that no one — an official, an individual, but especially officials — should attack, whether it’s a media outlet or individual journalist.  Frankly, I think it’s dangerous.  And so, I do not think that’s appropriate.

However, I do believe there is a social contract with responsible journalists like you that while a media outlet may have certain views, while individual journalists may have certain views, it’s very fair for journalists to be critical of elected officials.  In fact, that’s their role in many instances, to raise for the public concerns that might exist about a government or an opposition or whoever it might be.  However, it’s critically important also, as you understand well, as a respected and balanced journalist, that that be done in a way that is not a personal attack on the individual either.  That it is providing information to the public so that they can make decisions when they vote next or when they respond to their elected officials about their goals so that people are getting the information they need, people are getting criticisms that they may not be aware of, and yet they’re doing so in a way that is not simply an attack on an individual.  So, whether that’s coming from an elected official or coming from the journalist, I think it’s important to keep that balance in place and to do so in a fair way.

Telma TV:  Your Excellency, thank you for this interview.

Ambassador Aggeler:  Thanks so much.