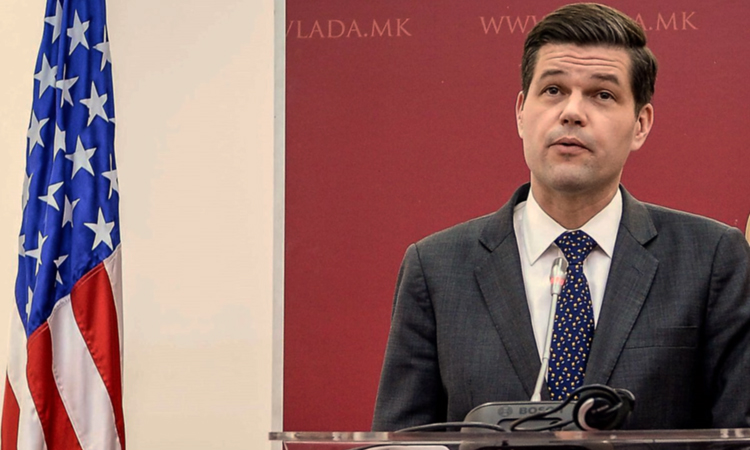 A/S Mitchell: I would like to thank PM Zaev for his hospitality.  It’s a joy to be back in Macedonia.   I have had very productive conversations today with the Prime Minister, Foreign Minister Dimitrov, VMRO President Mickoski, other Members of Parliament, the Speaker of your Parliament, heard from Macedonians from the business community and civil society.  I want to commend PM Zaev and his team for the enormous effort that they have put these past several months in working with Greece on this historic Prespa Agreement.  I know that this was a long and difficult process.  It required sacrifices of both parties, it required sacrifices not only of Macedonia but also of Greece.  We talked at length today in all of my meetings, about the upcoming referendum and my message to every Macedonian that I met today was the same: that this is a decision that only Macedonians can make; Macedonia has been on a path towards the West now for a very long time, and that we urge all Macedonians to exercise their fundamental freedom but also responsibility at the time of the referendum and to turn out and vote.  I think this is a historic opportunity, this is the pathway to NATO and the European Union.  It is in Macedonia’s interest to having citizens make sure their voices are heard.  I don’t think this is a moment in history when you want your voice to not be heard.  I think it is important to speak up, make your opinion clear.  The United States is supportive of Macedonia in this process and we believe it is in Macedonia’s interest, it is in Europe’s interest, it is also in America’s interest   to see a Balkans peninsula that is stable, secure and prosperous.  That has been my message in my meetings today.  I think an opportunity like this is historic.  I think the prospect of an opportunity like this again in our lifetimes is very small, so I urge all Macedonians to exercise their freedom as well as their responsibility and get out and vote at the time of the referendum.  Thank you for having me, I appreciate the Prime Minister’s hospitality and the hospitality of the people of Macedonia.

Q: Many Macedonians have expressed unhappiness with Ambassador Baily’s behavior in Macedonia.  Are you aware of this?

A/S Mitchell:  We have an Embassy team that is working really hard with the government as well as with the opposition on a day to day basis, across a number of fields.  We have got close security cooperation with Macedonia so my main focus has been on continuing to move forward that agenda.

Q:  What will happen with Macedonia if the referendum fails?

Q:  What was your message to Mr. Mickoski?

A/S Mitchell:  My message to Mr. Mickoski was the same as in all of my other meetings.   I made it clear that America sees Macedonia  as a very valuable friend and ally; that we appreciate the security cooperation we have, the economic relationship…I urged him to be clear in encouraging Macedonians to get out and vote, and again, I made it clear that this is only  a decision that Macedonians themselves can make.