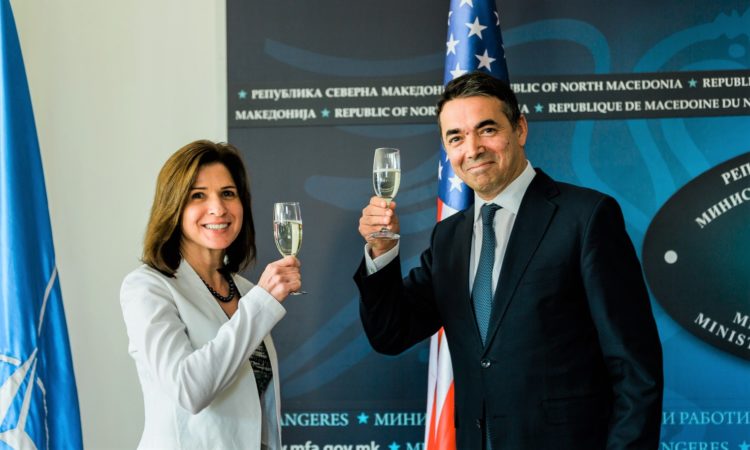 Remarks of U.S. Ambassador Kate Byrnes at the celebration of the 230th anniversary of the U.S. State Department at the Ministry of Foreign Affairs of the Republic of North Macedonia

So great to see you all here today. Good afternoon and thank you for joining us today to celebrate the 230th anniversary of the United States Department of State, and of the continuing partnership between the United States of America and the Republic of North Macedonia.
I would like to start by expressing my deep gratitude to the Foreign Minister for so graciously inviting us to celebrate this moment here today in this room. I would also like to recognize the outstanding support of his staff, without whom this celebration would not have been possible.  Their help in finding many of the images on display here today was absolutely invaluable.  I’d specifically like to thank Dragan Todorovski, whose black-and-white images that you see on display here provide a historical archive of our moments of bilateral relationship over the past two and a half decades.

This past July 27th marked the 230th anniversary of the founding of the U.S. Department of State.  It was on this date that President Washington signed the legislation establishing what was originally referred to as the U.S Department of Foreign Affairs.  It is particularly telling that establishing the government office responsible for cultivating relations with other countries was one of our new government’s very first priorities.  As a further indication of this Department’s importance, its first Secretary was a statesman, governor, drafter of the constitution and eventually our third president, Thomas Jefferson.

All that said, I would also note that its first budget was a little more than 50,000 dollars.  Jefferson had a staff of six people and responsibility for two diplomatic outposts, in London and Paris.  Clearly much has changed – we have many more times as many more people just here at our embassy in Skopje, and our world-wide budget today is also rather more sizeable too.

When reflecting on this anniversary during the commemoration in Washington that took place just few weeks ago, our current Secretary of State, Mike Pompeo noted that: “We at the State Department follow in the footsteps of our forefathers.  We use diplomacy to defend…unalienable rights—not just for Americans, but for people all across the world.”

That has certainly been true here since February 1994, when the United States first recognized and established diplomatic relations with this country.  At this point, I think it is appropriate to introduce Mitko Burcevski, although for most of you he needs no introduction. Mitko has been with us since the beginning, 25 years ago, working with nine different ambassadors and countless other American diplomats.  When speaking about the early days of the mission, he noted that the first day he went to the new embassy, he opened the door to find four walls, one window, an old wooden bench forgotten by construction workers, and a torn cardboard box filled with documents.

I’d also like to recognize another familiar face to many of you.  Mimoza Naumova, our protocol specialist, was the third local staff member we hired after we established an office here in 1994.  She can recall stories of interpreting for a long list of U.S. VIP visitors including then-First Lady Hillary Clinton, and of vainly trying to cram enough seats into the old embassy’s conference room to accommodate all the government officials in attendance for a meeting with then-Secretary Albright.

Despite these humble beginnings, Mitko, Mimoza, and many others, diplomats from the United States and local colleagues alike, worked day and night to build a team that helped create the economic, diplomatic, and security bridges that form the foundation of our partnership today.

We have walked alongside you hand-in-hand for the past quarter century, striving to realize our common vision of a more secure and prosperous future.  We sat beside you at the table in Ohrid and Przino.  We have cooperated together on the ground to foster peace and stability in Afghanistan and other corners of the world.  And we encouraged the governments both here and in Athens to resolve the longstanding name issue, opening the door to North Macedonia’s membership in NATO and the European Union.

Just as that original six-person State Department back in 1789 has expanded considerably over the years, so has our bilateral relationship matured and flourished as well.  We no longer operate out of that single-room office that Mitko was describing.  Our new and somewhat larger embassy, representing our diplomatic, political, trade, and security ties, embodies the breadth, the depth, and the permanence, of our mutual collaboration and partnership.

Examples of this collaboration abound.

The short movie we’re about to see captures images from the archives of our Embassy and of the Ministry of Foreign Affairs that highlight our years of cooperation and friendship.  It should also motivate us as we continue to work together towards a bright future and take our partnership to the next level.

With that, I would like once again to express my appreciation for your attendance here today and turn your attention to this brief film that our Embassy colleagues have put together.